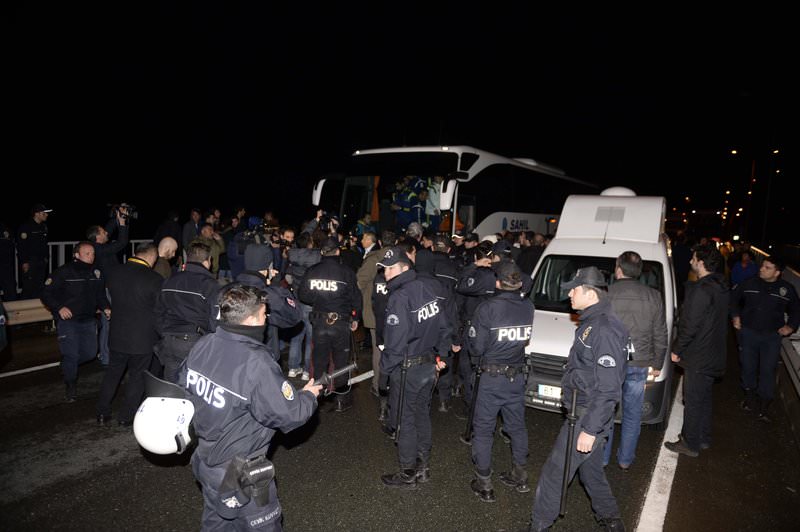 | AA Photo
by Daily Sabah with AA Apr 04, 2015 12:00 am
An armed attack on Fenerbahçe's team bus occurred while the team was heading to the Trabzon Airport on Saturday after a league match.

The driver was injured and taken to the hospital, Fenerbahçe's official network reported.

After the game against Çaykur Rizespor in northeastern province of Rize, which Fenerbahçe won 5-1, the Yellow Canaries were off to adjacent city of Trabzon to take the plane for Istanbul. However, near Arşin district of Trabzon province, the bus was hit by an object, leaving the driver bleeding heavily. He has been taken to hospital on a police vehicle.

The assault has been widely condemned, as the wounded bus driver remains hospitalized after suffering heavy bleeding.

Minister Kılıç condemned the attack on a sports program on state-run TRT Spor channel, while Prime Minister Davutoğlu reprimanded the assault on his Twitter account.

Meanwhile, Governor of Trabzon province, Abdil Celil Öz said: "Our findings show that it seems to be an armed assault. There's a metal object in the driver's cheekbone and there is no brain damage and he is in no risk of death."

Fenerbahçe football team called Sunday for the suspension of the national league championship in response to an armed attack on its team bus as players returned from a match.

"We consider that as long as this attack is not solved in a way that satisfies Fenerbahçe and public opinion, a suspension of the championship is inevitable," the Istanbul club said on its website.

"Blood ran and football was silenced. Finding and punishing the culprits is of vital importance for Fenerbahçe."

Interior Minister Sebahattin Öztürk conducted a press meeting on Sunday, during which he said, relevant criminal evidence was obtained and the perpetrators will be soon caught.

"We have obtained an empty case belonging to a shot gun shell and a rifle, found 100-150 metres away from the scene of the incident, with no serial number and assesed to be hand-made," the Minister said.

About Fenerbahçe team's demand that the national league championship be supended, the Minister said, the suspension is currently not needed.