Turks fly to Jerusalem as part of pilgrimage 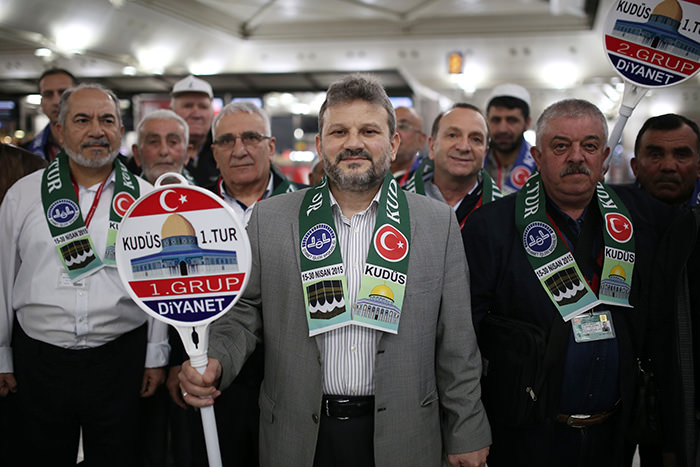 |AA Photo
by Anadolu Agency
Apr 15, 2015 12:00 am
A group of 154 Turkish people left Istanbul on Wednesday for Jerusalem as a part of religious umrah pilgrimage, which has been added to Turkey's umrah program for the first time in over 90 years.

Dozens of people gathered at Istanbul's Atatürk Airport to see their families and relatives off during their trips to holy sites. The plane of the first 78 people of the group left Istanbul in the early morning while the others departed at around noon.

Their trip came after Turkey's Directorate of Religious Affairs announced in February that they had included Jerusalem in the umrah program, at the request of the public.

Jerusalem is home to the Al-Aqsa Mosque, which for Muslims represents the world's third holiest site after the holy mosques of Masjid al-Haram in Mecca and Masjid an-Nabawi in Medina.

"I read this new umrah program in a newspaper and I liked it so much when I learned Jerusalem has been included in the program," Uğur Künefe, a taxi driver in the southern Antalya province, told Anadolu Agency. "Thank God I am here right now to go to three holy places. I am very happy and excited. It is my first time."

Retired hotel manager in the southern Antalya province, İbrahim Özen, 64, heads to Mecca and Medina for the fifth time, as a part of the umrah and the hajj, but it is his first pilgrimage to Jerusalem.

"Together with my wife, we always planned to go to Jerusalem but we just could not go there before. Thanks to this new program, we will be able to see the holy places there."

Esma Dogan, 18, a student in the southern Adana province, is one of the youngest people in the group.