Turkey's PM Davutoğlu receives children from around the world 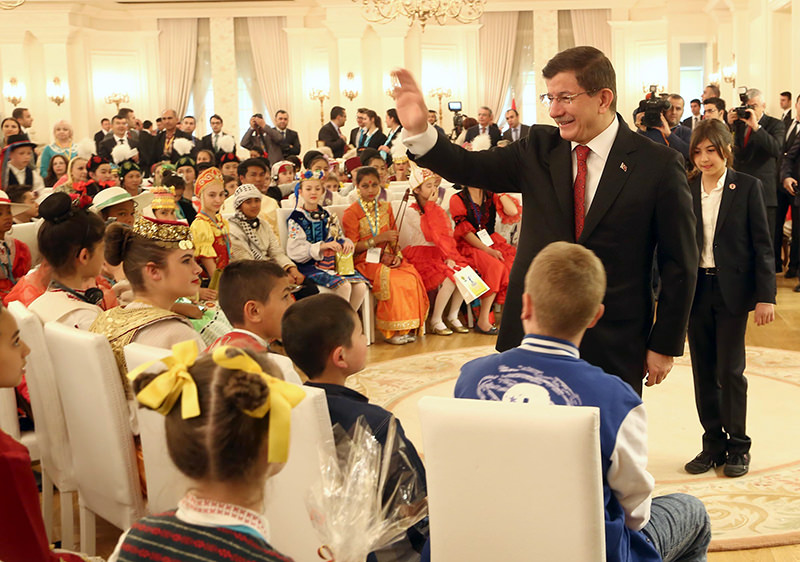 | DHA Photo
by Daily Sabah Apr 21, 2015 12:00 am
Prime Minister Ahmet Davutoğlu on Tuesday received children from 34 countries who are in the country to mark Turkey's April 23 Children's Day.

Davutoğlu met children dressed in the traditional costumes of their countries at the Prime Ministry office in Ankara, and conversed with the children, receiving gifts from them after delivering a speech to his young guests.

Davutoğlu stressed in his speech that achieving peace in the world depended on children "who do not have a place for hypocrisy and deception in their world."

He pointed out that Children's Day was declared by Mustafa Kemal Atatürk, founder and first president of the Republic of Turkey, who was the only leader "celebrating the Day of National Sovereignty with children." National Sovereignty Day marks the opening of parliament in 1920 and is viewed as a landmark step for the country's struggle for independence after the fall of the Ottoman Empire that eventually led to the foundation of the Republic three years later. "Sovereignty is indeed related to children. The future of humanity lies with children, as the future of countries depends on the preservation of their sovereignty," he said.

Davutoğlu said he had met many children from Colombia, Bosnia-Herzegovina, Afghanistan, Moldova, Afghanistan, Kyrgyzstan and the Palestinian territories among others, and witnessed "a bond of love." "This is how we want to see the world. You can build peace in the world only through children who have no place for hypocrisy and deception in their world," he said. He said children around the world fall victim to conflicts and difficulties, "from Syrian refugee children to Palestinian children under (Israeli) blockade, from African children vulnerable to epidemics to children of those who have perished in the Mediterranean Sea while they were looking to start a new life."

National Sovereignty and Children's Day held on April 23 every year, brings together children from around the world to attend various activities and bond together during their stay in Turkey. They also perform shows - from concerts to folk dance performances - at a festival organized by the state-run Turkish Radio and Television Corporation (TRT).