Six dead as another migrant boat sinks off Turkish coast 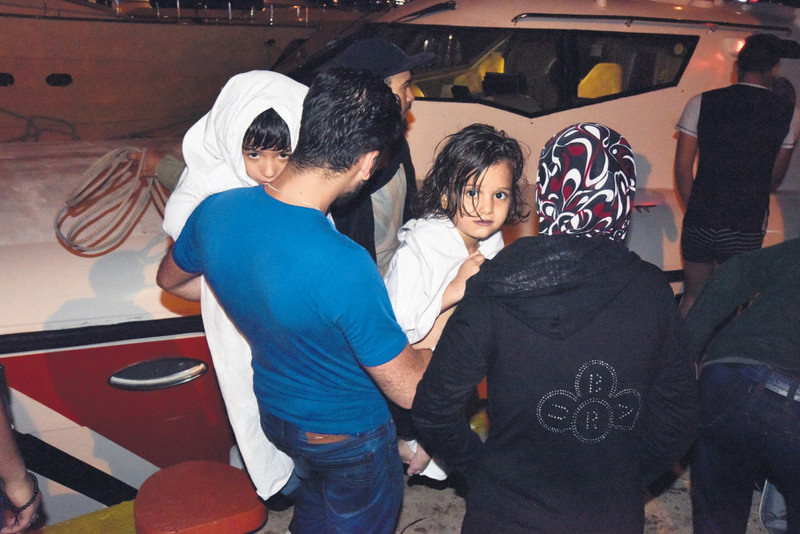 A boy and a girl were among the survivors of yesterday's sinking while another young girl was found after five hours in the freezing water underneath the capsized boat.
by Daily Sabah Jun 23, 2015 12:00 am

A boat carrying Syrian illegal immigrants capsized in bad weather off the coast of Bodrum, a town in southwestern Turkey's Muğla province. Six migrants were killed. About 60 migrants were rescued by the coast guard following the incident around 4:30 a.m. yesterday.

The migrants were en route to the Greek island of Kos, which is approximately five miles west of Bodrum, a popular destination with Turkish and foreign tourists. Fishermen in the area spotted the migrants and alerted the coast guard. The coast guard rescued migrants clinging to wreckage and those who managed to reach a nearby Turkish islet by swimming. More casualties are feared as crews continue combing the Aegean Sea for an unknown number of migrants who are unaccounted for. A young girl was found alive under the capsized boat, next to bodies of three migrants. The girl rescued by divers reunited with her parents rescued earlier by the coast guard. Rescue workers said the girl was about to freeze to death as she had been stranded in freezing water for five hours. Ahmed Sohta, a survivor relating the incident to Doğan News Agency, said the boat suddenly capsized amid heavy winds and they managed to survive by holding on to the wreckage.

The migrant boat disaster was an eerie reminder of another tragedy off the Bodrum coast in March. Again, six migrants were killed when their boat sank in that incident as they were seeking to reach Greece, their gateway to Europe where they dreamed of living a better life.

With its proximity to the Greek island of Kos, Bodrum is a popular spot among migrants risking journeys even in stormy weather, at night and in small boats densely packed with dozens of people. While some manage to reach the island, many are stopped by the coast guard patrolling the area. Over 1,000 illegal immigrants attempting to cross into Greece by boats were captured by the coast guard over the past three weeks in the Aegean Sea, including over 260 migrants setting sail from Bodrum. As Turkey hosts some 1.8 million displaced Syrians who have fled the conflict in their country, it is not unusual to see Syrians living in makeshift tents in parks or begging on the streets, but in Bodrum, as media reports indicate, their number is swelling lately. Migrants with little money turn to begging to pay human traffickers or attempt to cross over to the Greek islands on their own. Media reports note a boom in sales of rubber boats and lifejackets in the town. Immigrants also pay large sums to smugglers who often abandon them halfway through the trip to escape capture.

Along with Syrians, undocumented immigrants from Middle Eastern and Asian countries increasingly head to Europe from Turkey via the Aegean Sea, despite the ever-present risk of death in overcrowded dinghies.

Still, Syrians who have been displaced by four years of civil war in their country make up the majority of captured migrants. Although Turkey offers a safe haven, many look to travel to Europe in pursuit of better employment, as the camps in the country can only house a small fraction of the total Syrian population.
Last Update: Jun 23, 2015 9:51 pm
RELATED TOPICS