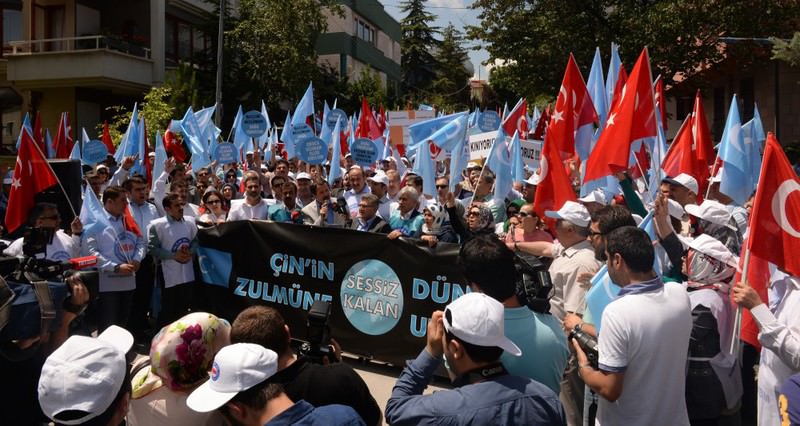 Activists in Ankara waved Turkish flags and flags of u2018East Turkestan' in their protest against China over the persecution of Uighurs, a Turkic community. Turkey hosts hundreds of Uighurs fleeing China due to oppression.
by Daily Sabah with Wires Jul 02, 2015 12:00 am

Protests against China's fasting ban and discriminatory policies toward the Uighur community have heightened in Turkey, with hundreds taking to the streets on Wednesday evening and Thursday

The Chinese government faces growing anger from the Turkish public with protests against discrimination and bans on the ethnic Uighur community in the Islamic holy month of Ramadan.

Restrictions on the Xinjiang Uighur Autonomous Region first drew protests on social media with thousands of people posting condemnations. On Wednesday evening protests broke out all across the country with demonstrators gathering in the streets to denounce the oppression of Uighurs in Xinjiang, also known as East Turkestan. Protests continued well into the early hours of yesterday while a group of Justice and Development Party (AK Party) members gathered outside the Chinese Consulate in Istanbul for an iftar, the dinner to break the fast, with water and bread in solidarity with Uighurs. Protesters chanted: "We stand with East Turkestan."

Protests resumed yesterday all across Turkey. Memur-Sen, a civil servants' union - one of the largest unions in Turkey - staged simultaneous protests throughout the country. In Ankara, Memur-Sen members joined by the public gathered in front of the Chinese Embassy. They shouted slogans, "Raise your voice against cruelty in Turkestan" and called for a boycott of Chinese goods. Memur-Sen President Ali Yalçın said Uighurs were banned from fasting and women wearing headscarves faced harassment and arbitrary detentions. "Quran education is blocked and thousands of Uighur children are forced to take classes teaching the state's ideology. The Chinese government forces locals speaking Turkic languages to speak Chinese," Yalçın said. He said Uighur property was confiscated and Uighurs protesting the oppression were shot dead in broad daylight or detained. Yalçın accused China of hiding the truth about Xinjiang by blocking foreign access to the area and China's state-controlled media were not reporting the oppression.

Amid mounting anger against China, the Turkish Foreign Ministry issued a statement on Tuesday that said reports about the ban of fasting and observing other religious duties on Uighurs in Xinjiang "caused sadness among the Turkish people." The ministry said "deep concerns" about the reports were conveyed to the Chinese ambassador in Ankara, underlining that Turkey respected China's "territorial integrity." In response to the ministry's statement, Hua Chunying, the Chinese Ministry of Foreign Affairs spokeswoman, said on Wednesday that all ethnic groups in China had freedom of religious belief.

The Uighur diaspora accuses China of a continuous campaign to restrain the religious and cultural activities of the Uighur community, which makes up almost half of the population in Xinjiang. Seyit Tümtürk, vice president of World Uyghur Congress, told Anadolu Agency earlier this week that China has been carrying out a systematic assimilation policy for decades and prevented Uighurs from practicing their faith and culture.
Last Update: Jul 03, 2015 12:39 am
RELATED TOPICS