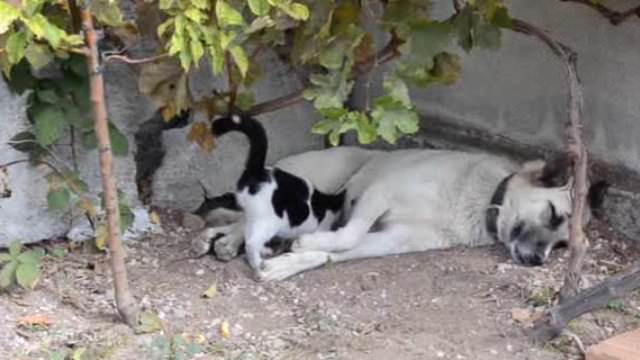 by Daily Sabah with AA Jul 04, 2015 12:00 am
A dog called Pamuk (means 'cotton' in English) in Turkey's northern province of Amasya has adopted two orphaned cats and is nurturing them as her own.

Pamuk, a mongrel in the village of Gümüşhacıkoy, began nursing the kittens and breastfeeding them after seven of her own puppies died, the dog's owner Bünyamin Şahin told Anadolu Agency on Friday.

"It is a rare incident," Şahin, who is a retired vet, said. "When we first saw the dog feeding the cats, we were very surprised."

He added, "I know due to my profession that dogs do not accept other animals, especially cats, but I see a different situation here as Pamuk is very docile."

Interspecies parenting is rare but has been reported in a number of animals.
Last Update: Jul 04, 2015 4:54 pm
RELATED TOPICS