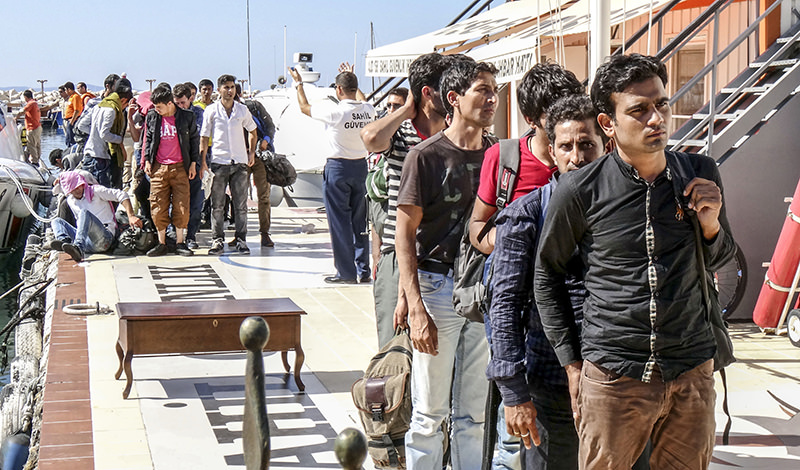 Migrants attempting to cross to Greece caught by Turkish officials July 6, 2015 (AA Photo)
by Compiled from Wire Services Jul 07, 2015 12:00 am
One migrant was killed and 30 others were unaccounted for as a boat carrying illegal immigrants, mostly Syrian nationals, sank off the coast of the southwestern Turkish town of Didim on Tuesday.

Doğan News Agency reported 29 migrants were missing and seven others were rescued by the Coast Guard, including two children and two women. The boat was carrying 37 illegal immigrants.

Search-and-rescue crews are combing the Aegean Sea to find the missing.

Turkish authorities intercepted more than 13,000 migrants on the Aegean Sea in the first six months of this year, already surpassing the total number of migrants captured throughout the whole of last year.

Coast Guard figures show the majority of migrants are citizens of Syria, Myanmar and Afghanistan, three countries threatened by deteriorating security and economic instability. Although Turkey has become the final destination for those from Asian and African countries in recent years due to economic growth, it still remains a major transit hub for migrants seeking to reach developed European countries.

Six Syrian migrants were killed and some 60 were rescued in June off the southwestern coast of Turkey as they were trying to reach Greece from the Turkish town of Bodrum in an overcrowded boat in the latest tragedy to strike migrants three months after another six were drowned in the same area.

Didim, like Bodrum, is a popular summer resort swarming with tourists and migrants alike in the summer. Migrants often depart for Greek islands at night to avoid detection, though journeying in broad daylight is not unusual.