Trial of neo-Nazi murders of Turks in Germany drags on 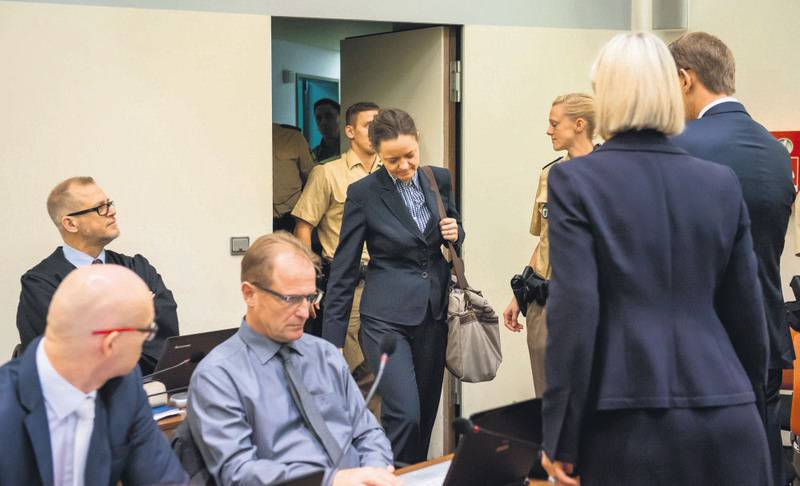 by Yusuf Ziya Durmuş Jul 08, 2015 12:00 am
In its second year, the trial of the National Socialist Underground (NSU), a gang accused of murdering German Turks and a string of robberies in Germany, has bogged down due to bureaucracy and the demands of the sole defendant. The legal process has now been suspended due to a demand by Mathias Grasel, a new lawyer added to the three-lawyer defense team of Beate Zschaepe, the only surviving member of the gang.

Grasel is the fourth lawyer assigned to Zschaepe, 40, who has kept silent since the trial started in May 2013. The lawyer has asked the court to suspend the hearings for three weeks so that he can thoroughly examine the proceedings, and the court, rejecting the prosecutor's appeal not to heed the lawyer's request, as the defendant had already been assigned three lawyers, approved the request, canceling five hearings this month. Zschaepe had tried to fire her lawyer Anja Sturm last month over a rift with her defense team, but her request was overruled.

The suspension of hearings will add to the woes of critics of the trial who had already expressed dismay with the lengthy process, which has further dragged on by Zschaepe's silence in countless hearings as a legal tactic.

Seda Başay Yıldız, a lawyer for families of victims, told Daily Sabah that the assignment of new lawyers in lengthy trials is quite common and that it would also lead to the trial being prolonged further.

The elongation of the trial has been linked by its critics to efforts to cover up German intelligence service involvement.

Prosecutors in the previous hearings had portrayed the NSU as a three-person gang with racist motives, but lawyers for the victims had complained about the failure to include suspected assistance to the gang by intelligence services or at least ignoring their actions.

The NSU, which was composed of two men and a woman, is accused of killing 10 people, including eight German citizens of Turkish origin, a Greek man and a policewoman, and carrying out bomb attacks and bank robberies between 2000 and 2007.

Zschaepe is standing trial as the only surviving gang member while four others are being tried on charges of aiding and abetting the gang. Zschaepe faces 27 charges linked to bombings and murders. Uwe Böhnhard and Uwe Mundlos, two other NSU members, were found dead in 2011, apparently as a result of suicide after Zschaepe had surrendered. Authorities later determined that the gang was responsible for murders initially blamed on domestic disputes within the German Turkish community.

After the discovery of the NSU, it was revealed in the trial that the gang had connections to informants recruited by the German intelligence service, which raised the question of whether intelligence officials had knowledge of the gang's activities that they deliberately ignored.

Lawyers for the Turkish victims of attacks had complained earlier that the German state failed to shed light on the gang's "connections" to German intelligence services.
Last Update: Jul 08, 2015 10:13 pm
RELATED TOPICS