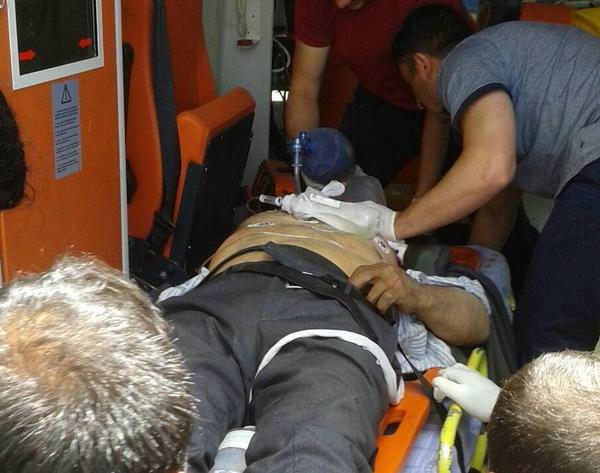 Photo taken from Twitter
by Daily Sabah Jul 12, 2015 12:00 am
PKK militants opened fire on a minibus on Sunday during a clash with Turkish gendarmerie, as a result of which one civilian was killed and two others injured.

The incident happened in Turkey's northeastern town of Göle in the Ardahan province. On July 9, municipality employees were sent to the town's forestland to tackle the water cut resulting from a problem in the drinkable water reservoirs, but PKK militants who were already in the region prevented the municipality officials from fixing the problem, by stating they were the ones who damaged the water reservoirs, according to a statement released by Ardahan's office of governorate on Sunday.

The statement said, Turkish gendarmerie responded to the incident at this point, starting an investigation but on Sunday, as the gendarmerie's investigation was continuing, PKK militants opened fire on the soldiers.

During the fire exchange, a minibus with four civilians inside was also struck by PKK bullets, as a result of which one person inside the vehicle was killed, and two others were injured. The statement further said, the officials could not yet determine how and why the minibus was near the clash.

The conflict between the government and the PKK, considered a terrorist group by Turkey as well as the U.S. and EU, has been ongoing since 1984 and has resulted in some 40,000 to 100,000 casualties as well as major economic losses for Turkey. The PKK, which aimed to establish an independent Kurdistan in southeastern Turkey, has been headquartered in northern Iraq's Qandil Mountains since withdrawing from Turkey.

The Kurdish Communities Union (KCK), an umbrella network that includes the PKK, had announced on Saturday that the cease-fire which was declared via a message from the PKK's imprisoned leader Abdullah Öcalan in 2013 has ended.

In a blistering statement, the KCK administration accused the government of engaging in deeds "that could lead to conflicts" and failing to hold on to the cease-fire deal.

"The decision to mobilize all sources including the guerilla forces has been taken to halt the construction of all dams," Saturday's statement read. The KCK has also expressed unease regarding the construction of roads and outposts, perceiving their construction as Ankara's attempt to strengthen its hand in case of a conflict and announced the attempts will be reciprocated by the militants.

"As of now, all the dams and the machines used in the construction of the dams will be the target of our guerilla forces," the statement further read.
Last Update: Jul 12, 2015 4:24 pm
RELATED TOPICS