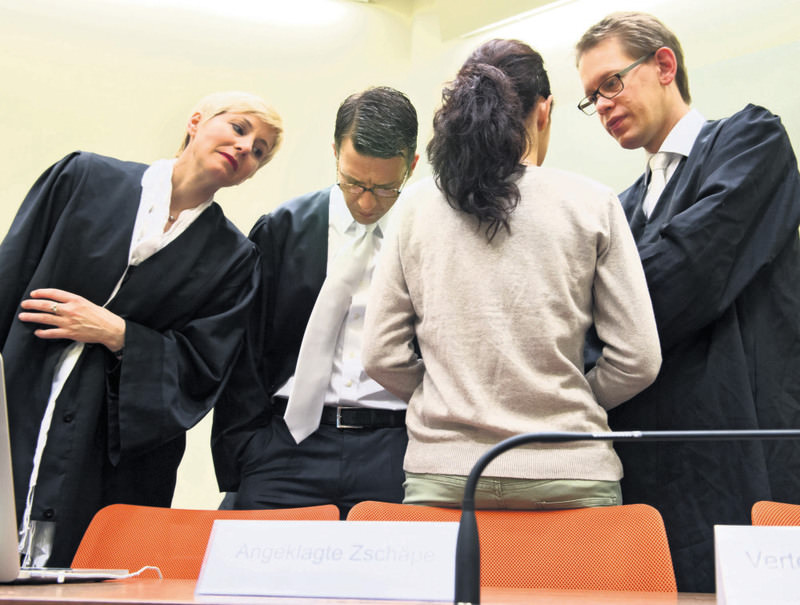 Already dragging on, the trial of Beate Zschaepe, a member of a neo-Nazi gang implicated in the killings of Turks in Germany in the early 2000s, barely avoided further complications impeding the legal process after the judge rejected her public lawyers' request to resign

Lawyers for Beate Zschaepe, the only defendant in the trial of a neo-Nazi gang implicated in the killings of Turks in Germany, asked the court to be relieved of their duties. Chief justice Manfred Goetzl averted a likely mistrial by rejecting their request.

The request has posed another snag for the trial already facing criticism for failing to shed light on German intelligence's alleged role in covering up the gang's crimes.

Zschaepe is the only surviving member of the Nationalist Socialist Underground (NSU), a three-member neo-Nazi gang accused of murdering 10 people, including eight Turkish-Germans, a Greek migrant as well as a German policewoman in the early 2000s. The gang is thought to be supported by larger neo-Nazi groups and deliberately ignored by German intelligence aware of its wrongdoings.

Wolfgang Heer, Wolfgang Stahl and Anja Sturm sought the court's permission in yesterday's hearing held at a Munich court to step down as lawyers for Zschaepe, 40. Heer told the court their decision was thoroughly thought out and they were aware that their resignation may lead to the trial starting from scratch. The lawyers did not cite any clear reason for their decision, but a disagreement with the defendant was evident in past hearings as Zschaepe sought to fire Sturm as her lawyer on the grounds that she came unprepared to trial and placed her "under mental duress" in her consultations with the defense team.

Manfred Goetzl rejected their appeal and stated they had not given sufficient grounds for quitting.

Earlier this month, Mathias Grasel, a new lawyer, was added to the defense team, further bogging down the legal process that began two years ago. Grasel has asked the court to suspend the hearings for three weeks so that he can thoroughly examine the proceedings, leading to the cancelation of several upcoming hearings.

The court in Munich has had 219 hearings since the trial first started on May 6, 2013. Zschaepe only once broke her silence in response to the judges' question of whether she was listening to accusations and simply said "yes."

The other NSU members, Uwe Böhnhardt and Uwe Mundlos, who along with Zschaepe were also involved in bomb attacks in Turkish-German neighborhoods and bank robberies, were found dead in 2011 after a bank robbery. Their deaths were ruled suicides. Four other suspects accused of aiding and abetting the NSU are also standing trial.

The trial was both a revelation and a supposed cover-up for many, as it shed light on how misguided German authorities were in wrongly tracing the killing to a mafia feud while failing to dig deeper into the connections of the NSU with the intelligence services. German intelligence services are blamed for deliberately turning a blind eye to the existence of the gang for over a decade even though it reportedly had informants all across the neo-Nazi scene in Germany, which flourished especially in the 1990s.

In an emailed statement to Daily Sabah earlier this month, Seda Başay Yıldız, one of the lawyers for the families of the victims, had acknowledged that the intelligence service is inclined to close the case as soon as possible. She said it was suspicious that the service did not present the files on the NSU to the court, which had been requested by lawyers for families of victims. She said the federal prosecutor's office supports this stance of the intelligence service. "We asked repeatedly for the intelligence service to hand over various files to the court, but the prosecutor's office always objected," Yıldız said.
Last Update: Jul 20, 2015 9:28 pm
RELATED TOPICS