Turkey: One soldier killed in clash with PKK 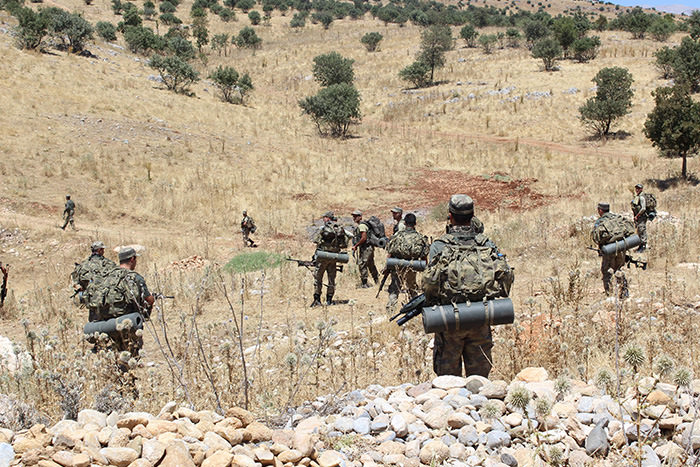 by Daily Sabah Jul 20, 2015 12:00 am
A Turkish soldier was killed and two were wounded in an attack by the PKK in Turkey's Adıyaman province yesterday, a week after the terrorist organization announced that the cease-fire that was declared via a message from the PKK's imprisoned leader Abdullah Öcalan in 2013 has ended.

Troops were combing an area where suspected hideouts of PKK militants were located when a group of terrorists opened fire. An unidentified soldier injured in the attack succumbed to his wounds at the hospital while other soldiers suffered from less serious wounds.

Turkish Armed Forces said in a statement that gendarmerie troops were conducting an operation in a rural part of Adıyaman when terrorists opened fire in the morning. Reinforcements were sent to the site upon the attack and one soldier was killed in the second attack on troops yesterday afternoon. A reconnaissance aircraft and more troops were deployed in the area and a manhunt to capture the terrorists was underway when the news went to print.

Media outlets reported that soldiers were scanning the area for terrorist presence after an attack at the construction site of a dam by the PKK in Adıyaman. The terrorist organization had stepped up attacks on dam construction sites, burning down trucks and bulldozers at various sites in southeastern Turkey.

The terrorist organization is involved in a bloody campaign under the pretext of Kurdish self-rule in southeastern Turkey since 1980s, which saw tens of thousands of people killed in the conflict. The group has largely ceased its activities after the government launched the reconciliation process to end the PKK's campaign of terror two years ago.