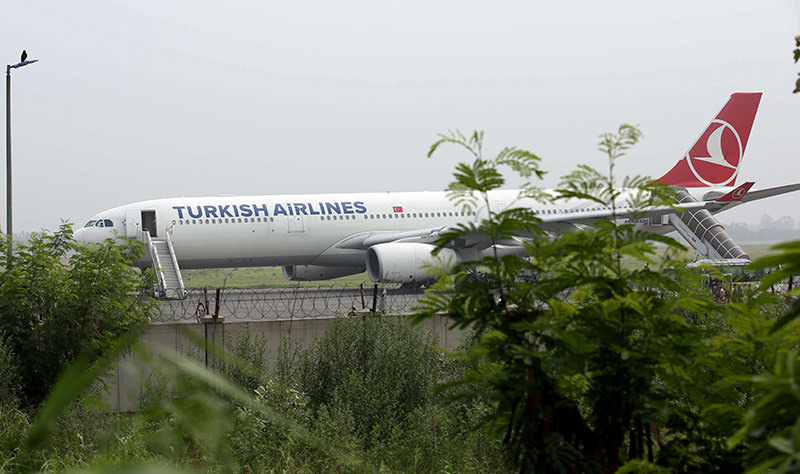 | AA Photo
by Compiled from Wire Services Jul 20, 2015 12:00 am
Turkish Airlines (THY) announced on Monday that a male flight attendant was linked to a bomb hoax aboard one of the flights of the Turkey-based international carrier. It is not clear whether the suspect, who was fired by THY, was responsible for multiple bomb hoaxes that led to the suspension of several flights. Turkish media reported that the unidentified attendant was detected, as he left fingerprints on a paper that read, "There is a bomb aboard," which was left aboard a plane traveling from Istanbul to Basel in April. The plane turned back over Bulgarian airspace after the discovery of the note warning of a bomb on board, which turned out to be false.

In March, another THY flight from Istanbul to Brazil made an emergency landing in Morocco after the crew found another bomb note in one of the plane's restrooms.

Earlier this month, a flight from Bangkok to Istanbul was diverted to New Delhi where it made an emergency landing after a bomb threat was scrawled in lipstick on a bathroom mirror. This bomb scare turned out to be false as well.

THY announced that a judicial process was underway regarding the flight attendant, while security sources speaking to the Doğan News Agency said one person was detained two months ago in relation to a bomb threat to one THY flight.

Speculations abound in social media regarding the identity of the suspect. Some social media users even claimed the suspect was linked to Lufthansa, a major German carrier and a main rival of THY, which expanded its global operations considerably in the past decade.

Speaking to reporters on Monday, THY Chairman İlker Aycı said the company could only dismiss the suspected employee and a police investigation was underway. He underlined that a deterrent sentence was required to prevent similar incidents in the future.

Although bomb threats turn out to be hoaxes more often than not, pilots are required to implement emergency procedures. If the threat is discovered in mid-air, the flights are diverted to the nearest airport, and all passengers and cargo undergo a thorough inspection. On long-distance flights, a bomb threat may force cancellation of flights. Experts note that bomb threats cost up to 100,000 euros per flight.