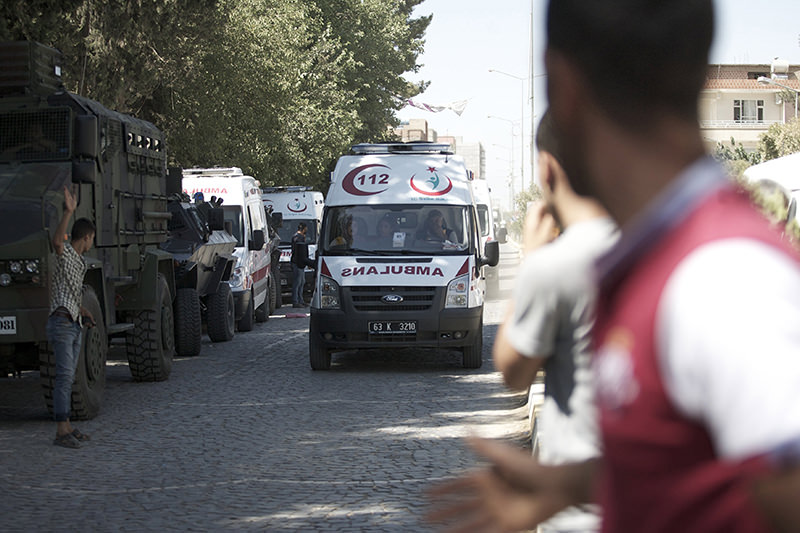 by Daily Sabah with AA Jul 20, 2015 12:00 am
The deadly bomb attack in southern Turkey on Monday that claimed the lives of 31 people and left 76 injured was condemned around the world.

The suspected suicide attack in Suruç, a town in southern Şanlıurfa province close to the Syrian border, targeted activists from the Socialist Youth Associations Federation (SGDF) preparing to help in the rebuilding efforts of Kobani, the Syrian town devastated by the the Islamic State of Iraq and al-Sham (ISIS), which was expelled by Kurdish forces.

U.N. Secretary-General Ban Ki-moon condemned the attack through his official spokesman. "No cause or grievance ever justifies the targeting of civilians," Farhan Haq told reporters in New York.

Referring to Ban, Haq added: "He sends his deepest condolences to the victims and their families, as well as to the government and people of Turkey, and wishes those injured a speedy recovery."

In Washington, White House spokesman Josh Earnest strongly condemned the "heinous" attack, saying: "We express our solidarity with the Turkish government and the Turkish people and reaffirm our undeterred resolve in the fight against the shared threat of terrorism."

In the statement released by the Office of the Press Secretary of the White House, National Security Council Spokesman Ned Price said that the U.S. strongly condemns the suicide attack. "We extend our condolences to the families of the victims, many of whom had come to Suruç to assist reconstruction efforts in Kobani. We also express our solidarity with the Turkish government and people and reaffirm our undeterred resolve to work with Turkey and other partners to combat the shared threat of terrorism," the statement further read.

"We continue to be mindful of the destabilizing impact that extremist groups like ISIS have in the region, and that's why you have seen the president work so hard to build and lead an international coalition to degrade and ultimately destroy them," Earnest said referring to U.S. President Barack Obama.

"I condemn this heinous act in the strongest terms," he said in a statement. "The attack in Suruç shows that we cannot relax in our fight against terrorism. Turkey is a significant partner in this regard."

Richard Moore, Britain's ambassador to Ankara, said he was "horrified" at the attack. In a message on Twitter, he said: "Thoughts with the wounded and with grieving families. I have kids that age. U.K. stands shoulder to shoulder with Turkey in condemning unequivocally all terrorism."

U.S. Foreign Secretary Philip Hammond wrote: "I condemn unreservedly today's sickening attack in Suruç, Turkey. My deepest sympathies are with the injured & families of those killed."

A message on the U.S. Embassy's official Twitter feed said: "We join all those across Turkey condemning the cowardly terrorist attack on innocents in Suruç."

Pakistan condemned the attack "in the strongest terms." In a statement, its Ministry of Foreign Affairs said: "So many precious lives have been lost. Our thoughts and prayers are with the bereaved families."

The statement added: "We extend our heartfelt sympathies and condolences to the brotherly people and government of Turkey and pray for the speediest recovery of those wounded in this abhorrent attack."

Human rights group Amnesty International said the attack showed "contempt for the right to life and breach[ed] the most basic principles of international law."

A statement from Amnesty called for a prompt, impartial and thorough investigation.