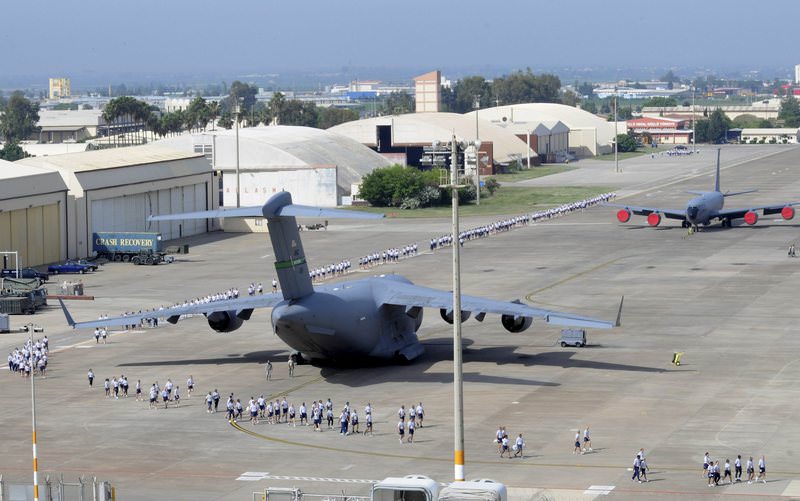 by Merve Aydoğan Jul 23, 2015 12:00 am
After a large U.S. delegation, including the Under Secretary of Defense Christine Wormuth, Special Presidential Envoy Gen. John Alle, and military and intelligence officials visited Ankara on July 7, it was reported that officials from both countries discussed regional developments prompted by the increasing threat posed by the Islamic State of Iraq and al-Sham (ISIS). In regard to the two days of meetings, in a press conference given by Deputy Prime Minister Bülent Arınç after the Cabinet meeting on Tuesday, Deputy Arınç said that an agreement was reached between the U.S. and Turkish officials, and added that a Cabinet decree has been signed. The Cabinet on Tuesday also agreed on a four-item strategy in combating ISIS.

Following the suicide bombing in Suruç that killed 32 people who were seeking to rebuild the war-torn Syrian city of Kobani, government officials have arranged an immediate meeting on Tuesday, which was followed by another security summit on Wednesday chaired by Prime Minister Ahmet Davutoğlu, in which he discussed the security measures and strategies in further combating ISIS. The White House has said that U.S. President Barack Obama had ensured the prevention of developments that would threaten Turkey's national security both inside and outside its borders, and reiterated the U.S.'s devoted commitment to continue its close cooperation with Turkey in the fight against ISIS. Although Arınç refrained from providing information on the exact details of the talks, he said an agreement was reached between the U.S. and Turkey on the location where the two countries will conduct joint military operations against ISIS.

The strategic plan first aims to repel ISIS militants to the east with the aid of Syrian opposition forces, and through this, Turkey aims to secure its border with Syria. The second step of the plan aims to provide air support for Syrian opposition fighters in northern Syria. Additionally, another critical item that was also discussed at the meeting was the use of the İncirlik Air Base in Adana province for military strikes against ISIS by coalition forces. The officials agreed to allow the U.S.-led coalition to use the İncirlik Air Base against ISIS, under Turkey's control. The final item on the strategic plan in enhancing the fight against ISIS includes Turkey beginning active participation in U.S.-led coalition operations. In case of situations where Turkey's border is directly threatened by ISIS, Turkish warplanes will actively participate in protecting the border. The Turkish warplanes, however, will not actively participate from the İncirlik base, but rather from air bases near the area.

While Turkey has long called for the creation of a safe zone inside Syria to protect its borders and provide some protection for refugees fleeing both Syrian regime forces and ISIS militants who have seized swathes of Iraq and Syria, it has been reported that the U.S administration will now endorse the idea.
Last Update: Jul 23, 2015 8:49 pm
RELATED TOPICS