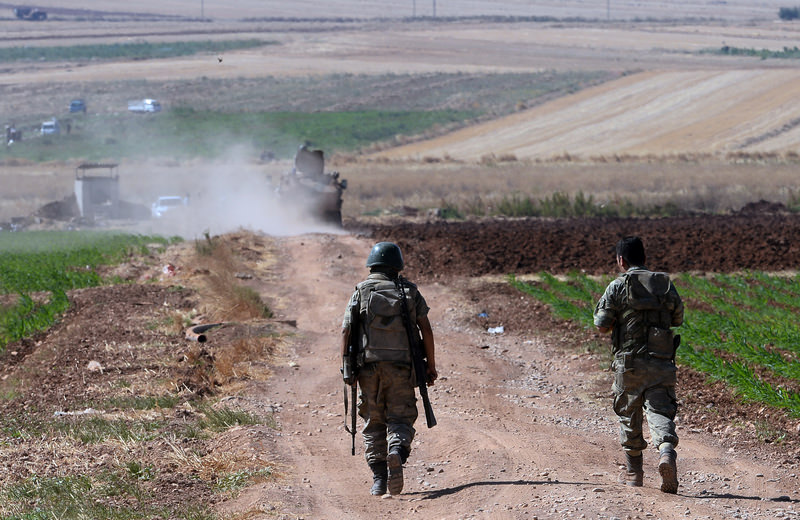 by Daily Sabah Jul 25, 2015 12:00 am
Suffering from the recent successful operations conducted by the Turkish Armed Forces and Coalition aircrafts, the self-proclaimed Islamic State of Iraq and al-Sham (ISIS) has retreated back from Turkish borderinto inner regions of Syria's Jarablous district.

After the attack in southern province of Kilis which killed an armyofficer and wounded two soldiers, Turkey launched first sets of operations against ISIS.

After successful airstrikes, ISIS militants started to retreat their lines of position near the Turkish-Syrian border after being hit and suffering major losses. As the bombing continued, the militants of the terrorist group stopped digging trenches and abandoned their check points along the borderline.

ISIS militants retreated back into Syria, towards Jarablous as armored vehicles of the Turkish Armed Forces crossed through the trenched area and came to the zero point of the border.
Also a few buildings occupied/held by ISIS including the customs building were seen to explode near the border.

Residents of southern Karkamış district stated that about a month ago they had witnessed ISIS militants placing bombs in the buildings and that some of the militants still kept watch in the area around the buildings.

The first wave of operations against ISIS was conducted on early Friday as a retaliatory attack for the attack that killed a Turkish officer in Kilis, while troop concentration of the militants of ISIS near Turkish border was also crippled.

Three targets, located in Syrian territory, were 10 to 15 kilometers away from Turkish border, and were being used as headquarters and rallying zone.