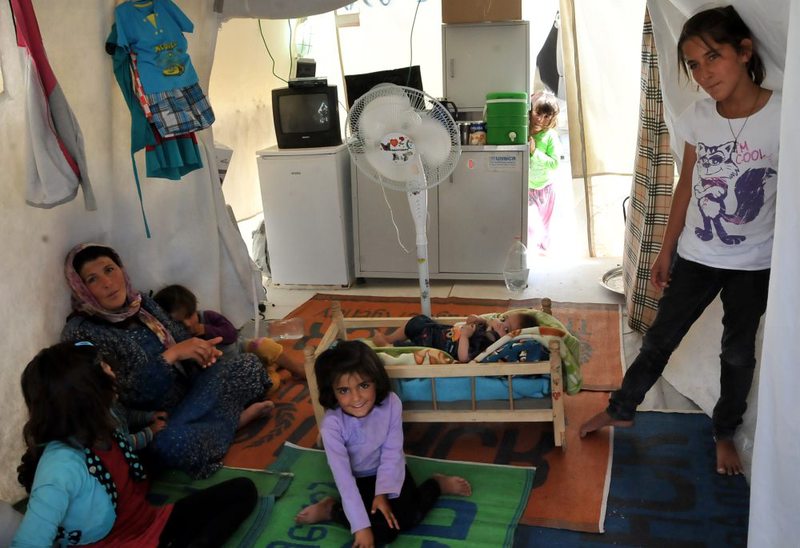 by Anadolu Agency Aug 08, 2015 12:00 am
Syrian Armenian families who fled the conflict in their country two years ago, say the treatment they received in Turkey alleviated their concerns of taking shelter in another country.

Armenian families reside in a tent camp in Suruç, a district of the southeastern Turkish province of Şanlıurfa where over 106,000 Syrian nationals stay in refugee camps set up by the Disaster and Emergency Management Authority (AFAD) that oversees 25 camps across Turkey's southern borders.

Hagop Tomasyan, a 50-year-old patriarch of a family of eight, arrived in Turkey from Syria's Kobane, which they migrated to from Aleppo where they faced pressure as an ethnic minority. He worked as a driver in Kobane and when the conflict escalated, they left everything they had there and fled into Turkey, along with six other Armenian families. He lost a brother in the conflict but managed to take shelter in Şanlıurfa with his wife and six children. "We came here after a difficult journey and thankfully, Turkey opened its border to us," he says. Tomasyan says they were initially afraid of traveling to Turkey. "People in Syria told us Turks do not like Armenians and bad things would happen to us, but we still came and never encountered any bad things. On the contrary, we are treated very well. Both Armenians and Kurds from Syria live here peacefully and nobody here judges us on our religion or ethnicity. We did not even hear a bad word," he says.

Turkey hosts over 1.8 million Syrians and more than 281,000 of them stay in refugee camps. Last year, the country received a group of Armenians who fled into Turkey from Kasab, a predominantly Syrian-Armenian town near the Turkish border as clashes between the Free Syrian Army and pro-Assad forces spilled into the small town.
RELATED TOPICS