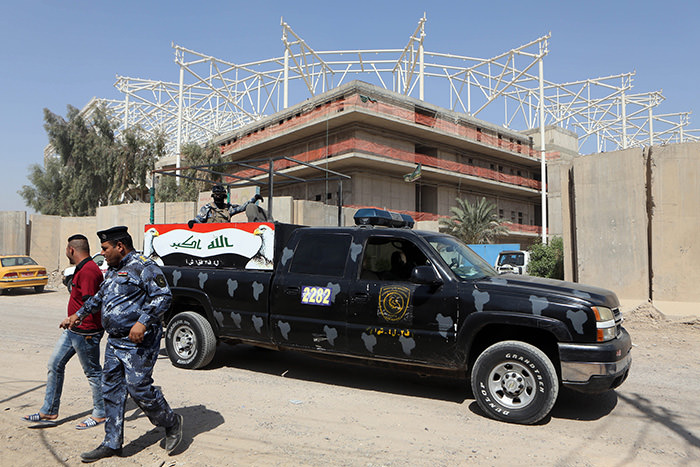 Iraqi security forces guard the entrance to a sports complex being built by a Turkish construction company, in the Shiite district of Sadr City, Baghdad, Iraq, Wednesday, Sept. 2, 2015 (AP Photo)
by Daily Sabah Sep 16, 2015 12:00 am
Two Turkish workers out of 18 kidnapped in Iraq were released on Wednesday in Basra and are in good health while others are still missing, the Foreign Affairs Ministry said.

"Two out of the 18 kidnapped Turkish citizens in Baghdad have been released," Foreign Affairs Ministry spokesperson Tanju Bilgiç said. The released workers have been identified as Necdet Yılmaz and Ercan Özpilavcı, the ministry added.

Previously, the group, calling itself Death Squad, released a video on Sept. 11 in which the 18 kidnapped Turkish workers were shown reading their names and where they come from as well as the group's demands.

Gunmen seized 18 employees of a major Turkish construction firm, Nurol Holding, on Sept. 2 in the Sadr City area of northern Baghdad where they were working on a football stadium project. Men armed with submachine guns and wearing black uniforms and balaclavas stood behind 18 men said to be the kidnapped Turks in a video posted online.

The militants identified themselves as "Furaq al-Mawt" (Death Squad) in a written message that appeared behind them alongside the words "We are at your service, O Hussein."

The group also wants Turkey to allow aid to be delivered to Shiite-based regions in Aleppo and Idlib.

In the video, the group also demands cutting the export of oil reserves in northern Iraq through Turkey, along with the withdrawal of Turkish military personnel in Iraq.

The group is allegedly linked to Hezbollah in Iraq, indicating the militants are Shiite. This could also potentially be an attempt to mislead the public. The group's origins are unknown.

In an interview with Anadolu Agency (AA) on Sept. 9, Bilgiç said Turkey is making every effort to secure the safe release of 18 workers, and said Turkey was monitoring the situation round-the-clock while also urging Iraqi authorities to secure their release as soon as possible.

Bilgiç said Turkey's ambassador to Iraq, Faruk Kaymakçı, was in touch with Iraqi authorities to see how the workers could be rescued without jeopardizing their safety.

Officials said the kidnappers stormed the construction site at dawn while the workers were sleeping in caravans and took them away in several SUVs. The officials spoke on the condition of anonymity because they were not authorized to speak to the media.