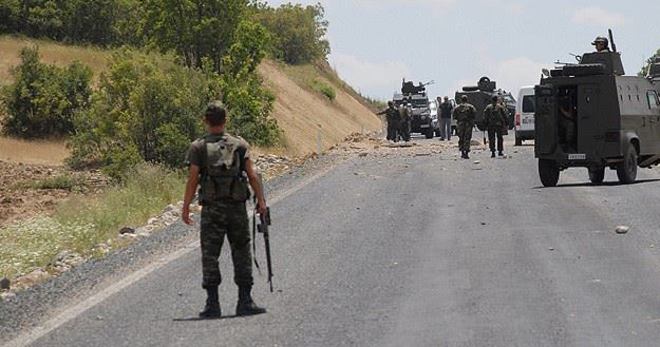 by Daily Sabah with AA Sep 17, 2015 12:00 am
At least three civilians were wounded late Thursday when explosives planted by PKK terrorists on the road went off in Turkey's eastern Bitlis province.

According to local security sources, the incident occurred on the Tatvan-Ahlat road near the Karşıyaka neighborhood of Tatvan district. The device exploded while an armored police vehicle was passing.

The three injured people were transferred to Tatvan State Hospital.

The main road was closed to traffic after the blast then reopened following a search by bomb disposal teams.

Following a suicide bomb attack in July allegedly carried out by ISIS in the southeastern province of Şanlıurfa that killed over 30 people, the terrorist PKK organization has renewed armed attacks especially targeting Turkish military and police forces.

Since July, more than 100 members of the security forces have been murdered by PKK militants and hundreds of terrorists have been killed in operations by Turkish security forces across Turkey and northern Iraq, including airstrikes.

Formed in 1978, the terrorist group has been fighting the Turkish government for an independent state until the early 2000's. The group then shifted its goal to autonomy in predominately Kurdish inhabited regions of Turkey.
Last Update: Sep 17, 2015 10:35 pm
RELATED TOPICS