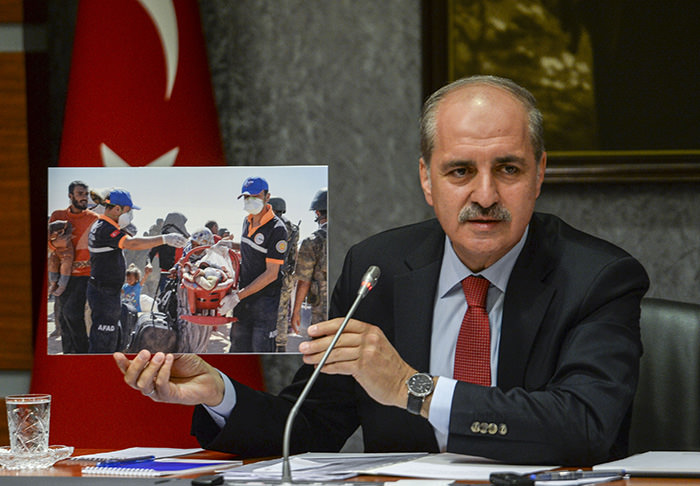 Turkey, which has the world's largest refugee population, has spent $7.6 billion to provide aid to them so far. Authorities are working on a project to build a life for Syrians within a safe zone in Syria

Turkey's Deputy Prime Minister and interim government spokesperson Numan Kurtulmuş has announced on Friday that Turkey has spent $7.6 billion on 2.2 million Syrian refugees which it is currently hosting.

Speaking at the Syrian Coordination Meeting in Ankara, Kurtulmuş stated that many Syrian refugees have attempted to cross the Mediterranean and Aegean Seas by boat to reach European countries, and many of them have lost their lives during the journey.

"Turkey's Coast Guards Units have rescued 53,228 refugees from drowning and 274 have lost their lives," Kurtulmuş said.

At present, more than $7.6 billion has been spent on refugees and $418 million of this amount were contributions from international platforms. Pointing to the number of refugees having applied for asylum in the EU, which is more than 428,000, Kurtulmuş said: "Of the 450,000 refugees [who applied for asylum in the EU], 158,000 people were accepted. Each day another boat carrying refugees across the Mediterranean Sea sinks. Boats are sinking and thousands of people get stranded in the sea. Unfortunately, many of them lose their lives."

Kurtulmuş added that while European countries adopt a policy that keeps them away from the sorrowful images of refugee boats, Coast Guard boats struggle to save lives. According to current figures, more than 53,000 refugees have been saved. In the last five years, around 6,000 refugees have lost their lives due to boats sinking or related incidents on the Mediterranean Sea.

Regarding the current situation of refugees desperately waiting at the main Istanbul bus station and in Edirne, Kurtulmuş said: "Hundreds and even thousands of Syrian refugees from different parts of Turkey are in Istanbul and Edirne, near the Greek border. Around 2,300 refugees have come to the Istanbul bus station and Edirne." Kurtulmuş said the refugees are being convinced to go back to their camps as there is no refugee acceptance policy via that route. He said not only Syrian refugee policies, but also other policies on Syria have come to a deadlock. "The current scene shows that Turkey is right about its views on the issue. With regard to a safe zone, we believe that it is not possible to resolve the refugee problem by eliminating the current problems only," he said, adding that a safe zone should be established. "This is an indispensable fact for Syrians to settle in a safe region in their country," he added.

Kurtulmuş said the entire international community should work together in order to develop policies regarding democracy, humanity, education and health around the world, and continued: "If a person dies because of poverty or from fleeing from oppression and terror, this responsibility falls on the shoulders of the entire world. Even though we are left alone in this mission, we announce to the world that we will continue to follow our path." He said whoever comes to Anatolia, the people of Turkey always bear a helping hand to those who are in need. "Hence, it is not surprising for us to expect the same from other countries," Kurtulmuş added. "Turkey wants European countries to embrace its stance regarding refugees," he said, and showed pictures of refugees to members of the press.

Regarding the proposed safe zone, Kurtulmuş said: "The civil war in Syria is becoming more and more complicated. The ones who to establish peace in Syria will win the war; however, it seems that this is not possible in Syria anytime soon. We are ready to continue our support." He added that it would possible to send some of the refugees to safe zones, pending they were established. "We are trying to create the necessary policies with the international community to test the safe zone," Kurtulmuş added.

He said Turkey's financial and spiritual support to refugees will continue whether or not the others contribute. "If they help, they will show that they that they are taking some of the responsibility," Kurtulmuş stressed. He said Turkey is ready to accept any help from the international community; however, he underscored that this crisis is not something new and it will probably not end even if the war in Syria does.