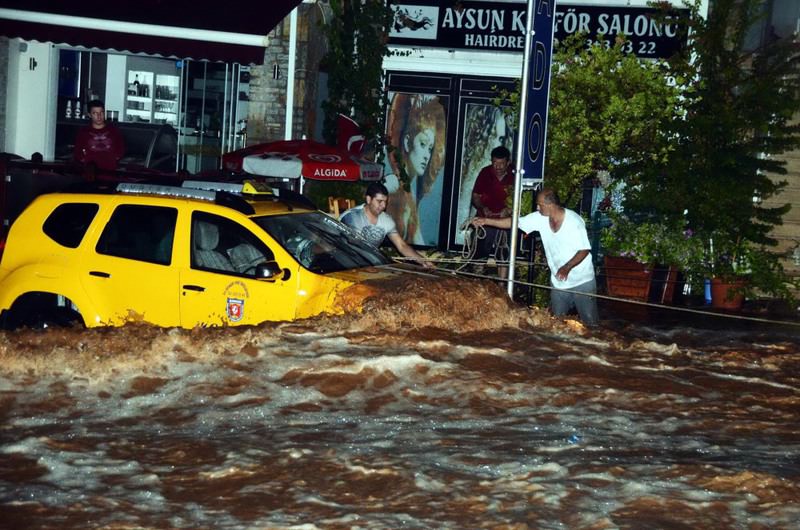 The flood washed automobiles away while the drivers and passengers were still inside.
by daily sabah Sep 24, 2015 12:00 am

The Directorate General of Meteorology warned those residing on or visiting the coasts of heavy rainfall and flooding. Bodrum has become the first victim of heavy rain and floods, which submerged houses and workplaces

The Directorate General of Meteorology warned people in Muğla and Antalya of heavy rains and flooding. According to a written statement released by the Forest and Water Affairs Ministry Directorate General of Meteorology, heavy rain is expected throughout Turkey, especially the Marmara, Aegean and Mediterranean coasts during Qurban Bayram. The directorate also underlined that the heavy rain might result in flooding and asked people to be more careful and cautious. Previously, weather forecasters announced that most parts of Turkey will experience heavy rains during the Qurban Bayram holiday. Although temperatures have been above seasonal norms for some time now, the temperature will drop 3 to 6 degrees Celsius in the Marmara, Aegean, Mediterranean, central Anatolia and Black Sea regions.

Muğla's Bodrum district, one of the most popular tourist destinations, has been hit by flooding and heavy rainfall that started on Tuesday night. While many houses and workplaces were submerged, automobiles were washed away with their drivers inside. Fortunately, no lives were lost, but the region has suffered a great amount of economic damage.

The heavy rains that started Tuesday night and continued for about three hours paralyzed daily life. At first, the rain caused flooding on the avenues and streets of the tourist hubs of the Gümbet and Cumhuriyet neighborhoods. Rainwater coming from the mountains turned streets and avenues into rivers. Some people were trapped in their cars due to rainwater, which rose as high as half a meter. Teams allocated by the Bodrum Municipality as well as Muğla Metropolitan Municipality helped people in need. Nearly 20 automobiles were washed away on Şakir Avenue and a transmission tower collapsed due to the flooding.

Streams in the Bitez, Ortakent and Yahşi neighborhoods overflowed and washed five automobiles away while their drivers and passengers were still inside. Search and Rescue Association (AKUT) teams managed to save the people at the last minute. Forty people, who were trapped in their houses and cars, were saved by the fire department and AKUT teams.

When the rain stopped, locals were shocked to see that everything in the district was submerged. The owners of houses and workplaces tried to get rid of the water with their own means. Merve Kaya, 22, who got married a year ago, was very upset to see her entire house was submerged. "The hotels built walls in front of the houses and blocked the way that rainwater used to flow through. I have TL 40,000 [$1,3228] in damage," Kaya said. Kamil Yener said that he was sleeping in his workplace when the flood hit Bodrum. "The windows crashed and water flooded inside. I could barely get away," he said.

Speaking to the press, the leader of the AKUT teams in Bodrum, Saadettin Uslu, said: "There were people trapped in their houses but we managed to rescue them. Our work will continue until the floodwaters withdraw." The municipality also announced that eight people had been injured in the flooding, but their conditions are not critical.
RELATED TOPICS