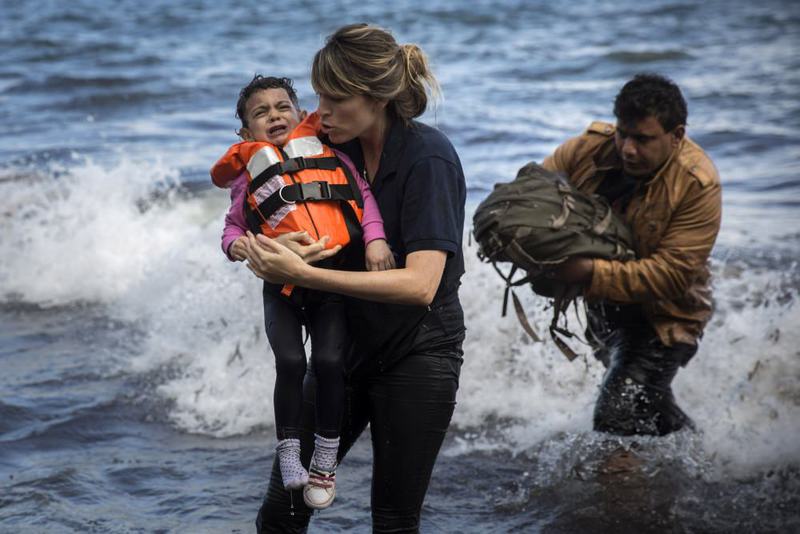 by Daily Sabah with Reuters
Oct 01, 2015 12:00 am
Potentially lethal journeys to Greece by desperate refugees via the Aegean Sea may see a drop, as weather conditions increasingly worsen off the Turkish coast. Salih Muhammed Ali, head of the Association of Solidarity with Syrian Refugees, a Turkey-based NGO composed of Syrians helping refugees, said the crossings to the Greek islands near the Turkish coast have already decreased and would further decline in the coming days, as the rising waves and bad weather pose a challenge to refugees. "We don't expect a new flow of refugees," he told Anadolu Agency.

The past summer and recent month saw an unprecedented rise in the number of refugees from Syria, where the ongoing conflict is aggravated, trying to cross into Greece in dinghies by risking death.

Decreasing temperatures and intermittent precipitation already affects refugees waiting to board boats in journeys organized by human smugglers. Refugees who were once a common sight on the streets and parks of Basmane, a central district of Turkey's Aegean city of İzmir, are now scarce. Another sign of a drop in the number of refugees is their absence from stores selling life vests. Life vest sales have skyrocketed in İzmir in the past months, as they are the sole tools for survival for refugees traveling in packed, unsafe dinghies.

According to figures by the Turkish Coast Guard, 54,257 refugees have been intercepted in the Aegean Sea since Jan. 1 and 69 human smugglers were detained. The official death toll of refugees who drowned en route to Greece stands at 117. The figures are 50 times higher compared to only 546 in 2011, the year the conflict broke out in Syria, displacing millions. Last year, 14,961 migrants heading to Europe were intercepted in the Aegean Sea. Turkey already hosts nearly 2 million Syrians who either live in refugee camps in Turkish border towns or on their own in other cities. With uncertainty prevailing on the future of their war-torn country, refugees in Turkey turn to Europe in pursuit of a better life, creating a massive movement of people on the continent, not seen since World War II. The high number of Syrians makes Turkey one of the top countries for hosting refugees, while Syria remains the top source country for refugees.

Nevertheless, a genuine drop might not be expected any time soon in the number of refugees, as a new incident shows. A woman and a child were killed when a rubber boat traveling from Turkey's Ayvalık coast to the Greek island of Lesvos sank. They were in the boat with 60 others. Eleven people were reportedly missing according to Greek media, while others were recovered alive from the sea by the coast guard.

A total of 97 refugees aboard another boat leaving from Ayvalık were rescued by the Turkish Coast Guard, after their boat, which had a capacity for 20, started taking on water.

According to experts, the rise in refugees taking the Aegean route is linked to increased security against illegal immigrants in the eastern Mediterranean Sea, a previously popular route among Syrians and other countries littoral to the sea, forcing migrants to seek other routes. Land routes to Europe via Turkey are another alternative for refugees. However it is more difficult, as refugees have to cover a far longer distance to reach Greece, when they can travel to the Greek islands by boat in less than one hour. Still, some refugees persist in their attempts to cross into Greece, the nearest gateway to Europe from Turkey, by land from Edirne, the northwestern border province of Turkey. Edirne has seen a rise in the number of refugees recently, after rumors circulated among the refugee community in Turkey that Germany would admit hundreds of thousands of Syrians from Turkey. Yesterday, some 55 people were rounded up from houses they rented in Edirne. They were not carrying residence permits to stay in Edirne, police sources said. Refugees are not allowed to travel to cities other than the one they are registered in, as a measure to stop illegal immigration.