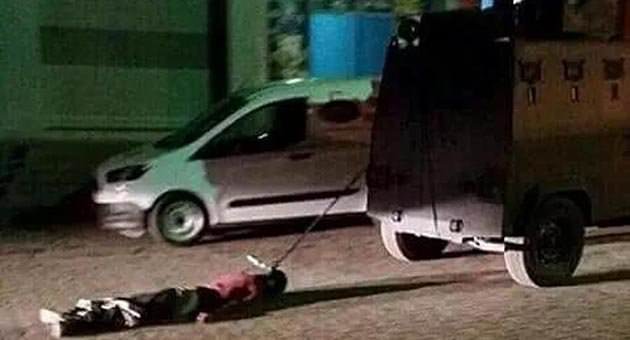 by Daily Sabah with AA
Oct 04, 2015 12:00 am
Interior Minister has suspended two police officers from duty with regards to investigation into a photo showing a security vehicle dragging a lifeless body in southeastern Şırnak province.

The photo, widely shared on Twitter, including by Peoples' Democratic Party (HDP) Co-Chair Selahattin Demirtaş, showed a Turkish armed military vehicle passing through a street at night dragging a body in civilian clothes tied to a rope attached to the back of the vehicle.

Demirtaş posted a message along with the photo, saying: "Look very carefully at this photo. It was captured in Şırnak the other day. Let no one forget it, because we will not."

According to reports, the dead body in the photo belongs to HDP deputy Leyla Birlik's brother-in-law Hacı Lokman Birlik, who was killed in clashes between security forces and the PKK while police were trying to fill in ditches dug by PKK militants.

The ministry had earlier said in a statement that an investigation was launched and "all aspects of the allegations" was to be handled.

"The Republic of Turkey is a state of law. Our fight against terrorism will persevere within the framework of the rule of law," the statement had said.

Prime Minister Ahmet Davutoğlu had also made a statement regarding the photograph, saying that the Police Department whose members risk their lives in the fight against terrorism and show the utmost care not to harm any civilians during operations cannot accept this kind of a behavior.

He had added that necessary instructions were given for legal and administrative investigation into the photo.