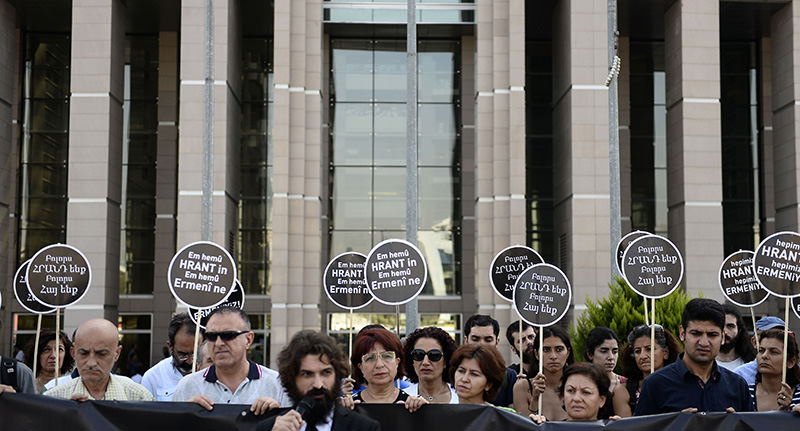 Authorities detained seven police officers, including former police chiefs, Wednesday and Tuesday in an investigation into a cover-up and negligence over the 2007 murder of prominent Armenian-Turkish journalist Hrant Dink. Five of the suspects were referred to court for arrest on Wednesday

Seven people were detained in an investigation into allegations that police deliberately neglected intelligence that led to the 2007 murder of Hrant Dink, a renowned Armenian-Turkish journalist, and were involved in a cover-up to protect the perpetrators. Five of the suspects were referred to court for arrest.

The suspects detained on Tuesday and Wednesday include former police intelligence chief for city of Trabzon where Dink's murder suspect and others involved in the murder hail from and former top executives of the intelligence branch of the police.

Prosecutor investigating the case had issued detention warrants for nine former police officers on Tuesday, including Ahmet İlhan Güler, a former intelligence director of police in Istanbul where the murder was committed, as well as Coşkun Çakar, a former deputy director of the Turkish National Police's intelligence department. Detention warrants stem from new evidence and findings in the investigation according to reports. Nine suspects have been charged by the prosecutor with being accessories to murder, forgery in and destruction of official documents and abuse of duty.

Dink, then editor-in-chief of the Armenian Agos newspaper, was shot dead by a teenager on Jan. 19, 2007 outside his office in Istanbul. Dink drew the ire of hardline Turkish nationalists in his lifetime, as he was one of the most outspoken voices calling for a debate to start on the controversial Armenian genocide issue. He received numerous death threats before his murder and faced several lawsuits for "denigrating Turkishness," an act punishable with prison terms, for his articles and editorials on the mass deaths of Armenians in 1915.

The role of police officers and public officials in the plot to kill the Dink had come to light as a new investigation focused on an alleged cover-up of the murder by officials linked to the Gülen Movement, which is accused of attempts to overthrow the government.

Ogün Samast, the teenager convicted of Dink's murder, is from from Trabzon, a city in northeastern Turkey, and an earlier investigation discovered that police officers in Trabzon were aware of the murder plot beforehand.

Gökalp Kökçü, the prosecutor assigned to the case after previous prosecutors allegedly linked to the Gülen Movement had dismissed the accusation of public officials, instead sought an arrest warrant for the police intelligence officers tied to the case. The police officers face accusations of causing death by negligence and misconduct and ignoring intelligence regarding the planned assassination. On Jan. 13, Muhittin Zenit and Özkan Mumcu, two members of the Turkish National Police's intelligence department, were arrested on those charges. Zenit and Mumcu were working at the police intelligence branch in Trabzon.

Muammer Akkaş, the first prosecutor assigned to the case, and his successors did not investigate the allegations that Akyürek deleted electronic and telephone logs at the National Police that could help to shed light on the murder, according to reports. Security camera footage of the murder was not properly examined and the role of police intelligence officials and gendarmerie officers both in Istanbul and Trabzon where the perpetrators allegedly planned the murder, were not investigated, according to media reports.

Ramazan Akyürek, the former head of the Turkish National Police's intelligence unit, who is believed to have ties with the Gülen Movement, was arrested in February on the order of an Istanbul court one day after he was detained as part of an inquiry into Dink's murder.

Akyürek was the chief of police in Trabzon when Dink was assassinated and later served as the head of the National Police's intelligence unit. He faces charges of negligence for failure to act despite knowing that Dink would be murdered by a teenager motivated by a police informant.

Sabri Uzun, who was head of the National Police Intelligence Department, had claimed his subordinates hid tip-offs warning of Dink's murder. Questioned about the murder, Uzun has said Ali Fuat Yılmazer, his subordinate in the intelligence department, hid an intelligence report from him regarding the plot to kill Dink. Yılmazer was already imprisoned for nine months as part of another case involving alleged crimes committed by Gülenist infiltrators in the police, accused of illegal wiretapping activities. He was re-arrested on Tuesday on charges of illegal wiretapping thousands of people in a new inquiry into alleged Gülenist infiltration of the police and judiciary.