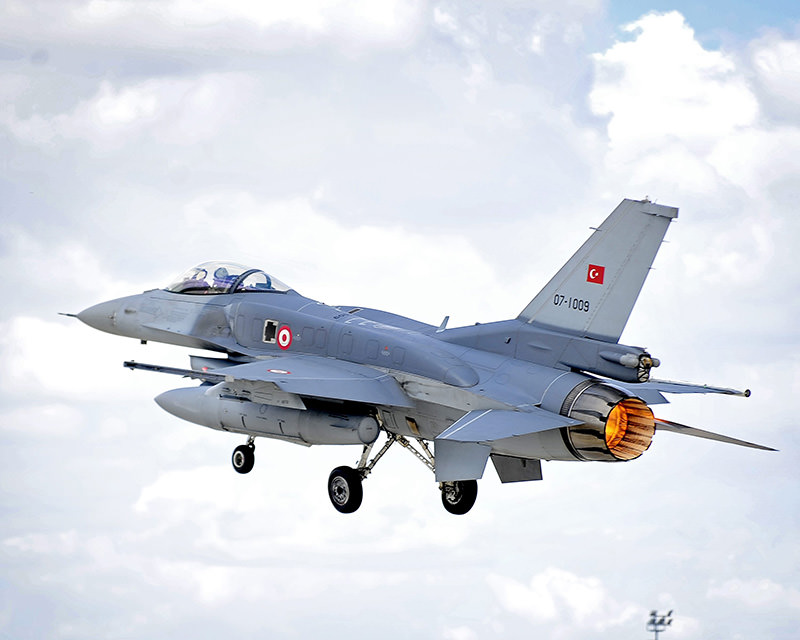 An F-16 Fighting Falcon of the Turkish Air Force (Tu00fcrk Hava Kuvvetleri) takes off on a sortie from Third Air Force Base Konya, Turkey during Exercise Anatolian Eagle (File photo)
by Daily Sabah with Wires
Oct 06, 2015 12:00 am
The Turkish army stated that an unknown MiG-29 interfered with eight Turkish F-16's on a patrol flight on Monday and Syria-based missile systems interfered with fighter jets along the border.

The MIG-29's harassment of Turkish F-16's lasted 4 minutes 30 seconds, while the duration of the intervention of the Syria-based missile systems was about 4 minutes 15 seconds, the army statement said.

It did not go into further detail about the nature of the harassment from the missile systems or whether the Turkish jets were in any danger.

The army's announcement came after two incursions into Turkish airspace by Russian jets over the weekend.

Russian Deputy Defense Minister Anatoly Antonov said on Tuesday Moscow would welcome a Turkish defense ministry delegation to discuss avoiding any "misunderstandings" in Syria where Russia and a coalition of Western and Middle Eastern allies are carrying out rival airstrikes.

NATO on Tuesday rejected Moscow's explanation that its warplanes violated the air space of alliance member Turkey over the weekend by mistake.

Meanwhile, Pentagon chief Ashton Carter said Tuesday that efforts by US military officials to work with Russia to keep the skies over Syria safe for pilots from both countries appear to be stalled.

Russian violations of Turkish airspace would prompt the United States to "strengthen our posture," Carter also warned, but did not give details.

Officials held discussions last week -- at Russia's request -- aimed at establishing accident-avoidance measures so that warplanes flying over Syria would not be in the same place at the same time.

"We are waiting for the Russians. They owe us a response," Carter said at a Spanish-US air base in Moron de la Frontera in southern Spain.
Last Update: Oct 07, 2015 5:52 pm