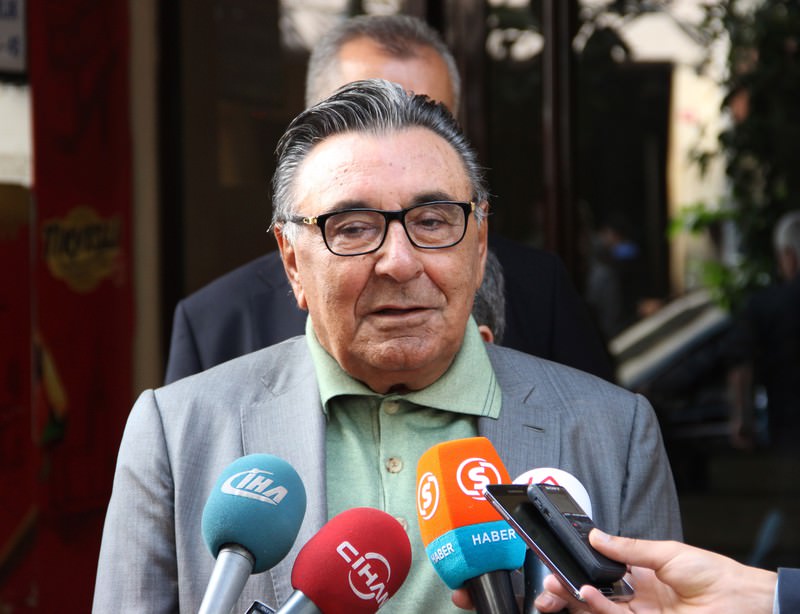 Photo shows Dou011fan Media Group's head Aydu0131n Dou011fan after his visit to attacked journalist Ahmet Hakan on Oct 3, 2015. (IHA Photo)
by Daily Sabah Oct 09, 2015 12:00 am
The Doğan Media Group needs to show respect to the freedom of thought and expression, said Turkey's Media Association in a written statement on Friday.

The Media Association's statement came after media mogul Aydın Doğan started waging a war against journalists who criticized him, by seeking prison terms for journalists. A large number of journalists and media companies such as Daily Sabah's parent company Turkuvaz Medya are being sued by Doğan and his news outlets in an act of "hypocrisy," as the sued journalists said in reference to the Doğan Media Group's complaint over press freedom in Turkey.

In response to lawsuits by Doğan and his companies asking the courts to slap journalists and media executives, Turkey's Media Association said: "Data displayed in October 9, 2015-dated Sabah newspaper [Daily Sabah's sister] show that Aydın Doğan and the Doğan Media Group have adopted a systematic intimidation policy to oppress journalists writing critically about them, and in this respect, they [Doğan and the Media Group] have filed lawsuits seeking their [the journalists'] imprisonment or indemnity."

Doğan and his media group's actions are a reflection of their "inconsistency" and "hypocrisy" since they themselves claim to defend press freedom in Turkey, the Media Association said.

An understanding that asks for an indemnity for messages posted on social media, imprisonment for news pieces, and columns will leave a "black stain" on Turkish media history, according to the Association's statement.

"Doğan and his media group have once again proved that they are 'sincere' about rights and freedoms thanks to the lawsuits filed against those critical of them," the statement continued.

The Media Association described Doğan Media Group's actions as a "coup d'etat" to the Turkish media, stating that a demand for journalists' imprisonment shows the real extent of "threats" and "intolerance."

The Media Association lastly condemned Aydın Doğan and his media group, calling on international foreign media, journalists — who show their close interest in Turkey's freedom of press in "every chance possible"— to also take a stand against this injustice.
Last Update: Oct 09, 2015 7:11 pm
RELATED TOPICS