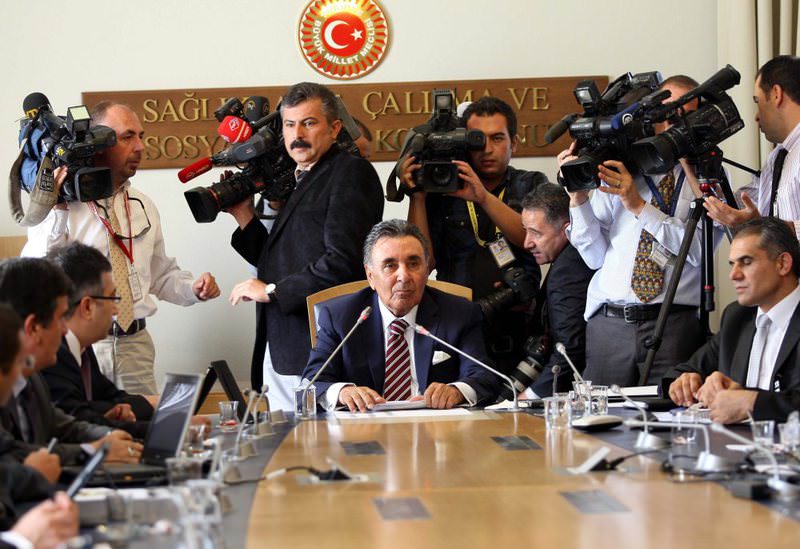 Aydu0131n Dou011fan, center, faces criticism of stifling the voices of other journalists by lawsuits, demanding their imprisonment for articles they penned.
by Yusuf Ziya Durmuş Oct 10, 2015 12:00 am

With lawsuits seeking imprisonment of those critical of him and his media group pile up, reaction to media tycoon Aydın Doğan, a self-proclaimed defender of press freedoms in Turkey, remains limited with no official statement coming from international media watchdogs yet on the issue

Aydın Doğan and his Doğan Media Group's intolerance of criticism, as witnessed by the complaints filed for the jailing and fining of journalists, has intimidated many media groups and international organization's supposed to protect the rights and freedoms of journalists. The army of lawyers employed by Doğan is engaged in a broad offensive against journalistic freedoms while the group professes to stand for the freedom of expression and thought.

The Media Association, a leading Turkish nongovernmental organization of journalists, was the sole journalistic rights group that condemned the hypocrisy of the group, arguing that the conglomerate and its owner pursued a policy of deterrence while complaining of intolerance to their criticism of others. Employees of the Turkuvaz Media Group, the parent company of Daily Sabah, alone face more than 20 lawsuits filed by Doğan, demanding millions of lira in compensation.

Aydın Doğan is at the center of a debate on press freedoms in Turkey, but this time the media mogul finds himself the target of accusations for attempts to imprison journalists critical of him and his Doğan media conglomerate.

Doğan, a self-styled defender of press freedoms in the country where there are complaints of attacks on his media outlets and his media companies are under fire for slapping journalists with hundreds of lawsuits seeking compensation and imprisonment, "an act of hypocrisy" according to sued journalists.

Reaction in Turkey to the Doğan case was largely muted and international media watchdogs remained silent.

Apart from sued journalists and media companies, the most vocal criticism of Aydın Doğan's lawsuits came from Media Association, a leading Turkish nongovernmental organization made up of journalists. It released a statement calling Doğan media group to respect the freedom of expression and thought. "Figures on lawsuits show Aydın Doğan and Doğan Media Group adopted a policy of deterrence against journalists writing critically of them and publishing critical news articles. Certainly, legal matters should be resolved by courts and we respect court rulings. Nevertheless, it is an example of hypocrisy for Aydın Doğan and his media group (to pursue this policy of deterrence) while they complain of intolerance to their criticism of others," the statement said. Media Association said Doğan group proved it did not provide real freedom of press, adding asking for compensation and prison sentences for critical coverage would leave "an ugly stain on history of Turkish media."

"Apparently, Aydın Doğan and his media group try to prevent journalists from doing their job, to intimidate and threaten them by lawsuits. It is a blatant blow to media freedoms. The extent of lawsuits which not only seek compensation or correction but also imprisonment of journalists is a proof of intolerance and scale of threats," the association said, condemning Doğan and his group as well as "those joining them in unfair treatment of journalists by not reacting to lawsuits, namely media NGOs." Media Association also urged foreign diplomats, journalists and international media watchdogs "which exhibit their attention to press freedom in Turkey in every instance" to oppose Doğan's actions.

Top officials also criticized the Doğan group of "silencing the media," as Deputy Prime Minister Yalçın Akdoğan described. Speaking to A Haber TV channel on Friday, Yalçın Akdoğan said filing of hundreds of lawsuits against hundreds of people by a media boss is "something against press freedom." "It means you want to silence certain media outlets completely," Akdoğan said, adding that taking everything written or spoken in the media to the court was equal to banning freedoms. Akdoğan also responded to allegations about stifling press freedoms in Turkey by saying that it was a false statement. "If there weren't press freedoms, we wouldn't see media outlets releasing damaging, insulting reports on government, president and prime minister almost daily," he said. Akdoğan also emphasized that legal action against terror propaganda in the media by judiciary should not be treated as a blow to press freedoms. "It is a crime to support a terrorist organization in any part of the world," he said. Doğan media outlets were criticized for releasing photos of a prosecutor who was held at gunpoint in his courthouse room by a terrorist organization. Websites operated by the media group had released photos where the prosecutor, later slain by terrorists, is seen with a gun to his head by a masked militant against the backdrop of a flag of the terrorist group.International media watchdogs monitoring press freedoms in Turkey have not released any statements yet on Doğan group's pursuit of imprisonment for journalists. No official statements were made by Freedom House, Committee to Protect Journalists, Reporters Without Borders and other prominent nongovernmental organizations as of Friday. These organizations are known for their support against assaults on Doğan media outlets and for repeated calls to Turkey for ensuring press freedoms. E-mail inquiries by Daily Sabah to the abovementioned organizations were left unanswered while an official from Freedom House simply acknowledged they did not have any statement on the issue.

Daily Sabah's sister newspaper, Sabah, was also unable to receive answers to its questions regarding prominent Turkish figures known for their support for press freedoms. Mustafa Koç, who heads a major business conglomerate and is known for his remarks supporting press freedom, was silent on Aydın Doğan's attempts to imprison journalists. Similarly, Cansen Başaran-Symes, director of TÜSİAD, another advocate of press freedoms, did not answer the questions. No statements were reported elsewhere by dignitaries known as press freedom advocates.

A large number of journalists and media companies, such as Daily Sabah's parent company Turkuvaz Medya and Türkmedya, are being sued by Doğan and his news outlets.

Lawsuits by Doğan and his companies ask the courts to slap journalists and media executives with prison terms of one year to six years in various cases involving criticism of the media tycoon. A journalist from Güneş newspaper faces 16 years in prison in total in two lawsuits filed by Aydın Doğan for news articles published in April and July 2015. Two columnists from Yeni Akit newspaper face prison terms up to six and a half years and nine years separately.

Doğan Media Group owns several newspapers and TV stations, including Hürriyet and CNN Türk. Doğan Media Group is known for its wide coverage of the imprisonment of journalists for crimes not related to their vocation. Their lawsuits actively seeking the imprisonment of those critical of it, but these lawsuits are missing from reports in its newspapers and TV stations.

Among those hit by lawsuits are Daily Sabah's sister newspaper, Sabah, and its journalists, major Turkish newspapers Yeni Şafak, Akşam, Star and Yeni Akit and their journalists.

Turkuvaz Medya faces more than 20 lawsuits by Doğan which were filed last year and this year. The company and its staff are the target of lawsuits asking for millions of Turkish liras in compensation. Some lawsuits were rejected by the courts while others are still proceeding.
RELATED TOPICS