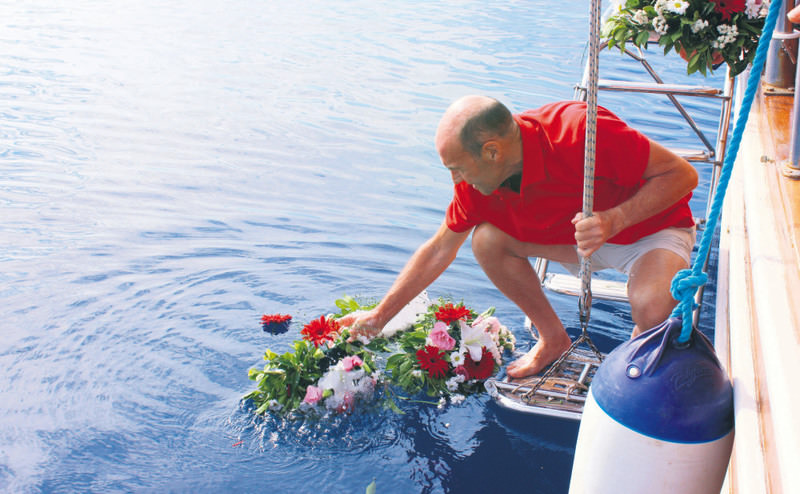 by Anadolu Agency Oct 12, 2015 12:00 am
British national Sidney Thomas Hill, 69, laid a wreath at sea off the coast of Bodrum over the weekend in honor of his father's comrades who died on Nov. 13, 1943, after German fighter plane hit and sunk HMS Dulverton.

Hill, whose father Sidney Richard Hill was among the survivors, grew up with stories about the tragic day when dozens of British soldiers died. Sidney Richard Hill died in 1980 from a heart attack but his son, born after the war, wanted to continue the family tradition of honoring those who died.

Hill hired a boat and reached the area where the ship had sunk near the Karaada Island. He said he had tried to reach the area twice before but had failed and was glad to have succeeded in his third try.

"During World War II, two British war ships left Alexandria in Egypt to collect British soldiers from the Greek island of Leros. On Nov. 13, 1943, one of the ships was bombed and sunk near Bodrum. That night, almost a hundred surviving soldiers were collected by the second ship and taken to Bodrum."

Hill said local fishermen had taken the soldiers to Greece's Meis Island without Germans noticing, from which another British ship collected them.

"My father, when his ship took a hit, jumped into the sea and swam for five or six hours. He believed he was the last of the survivors to be rescued by the second ship."

His father was 25 years old when the ship sank, said Hill, adding, "After the war he returned home and married my mother. I was born in 1946. He died in 1980 at the age of 62. I am here to remember my father and his lost comrades in arms."

"The only survivor who is still alive is 93-year-old Don Bush. I still talk to him once in a while. I also am representing him here."
RELATED TOPICS