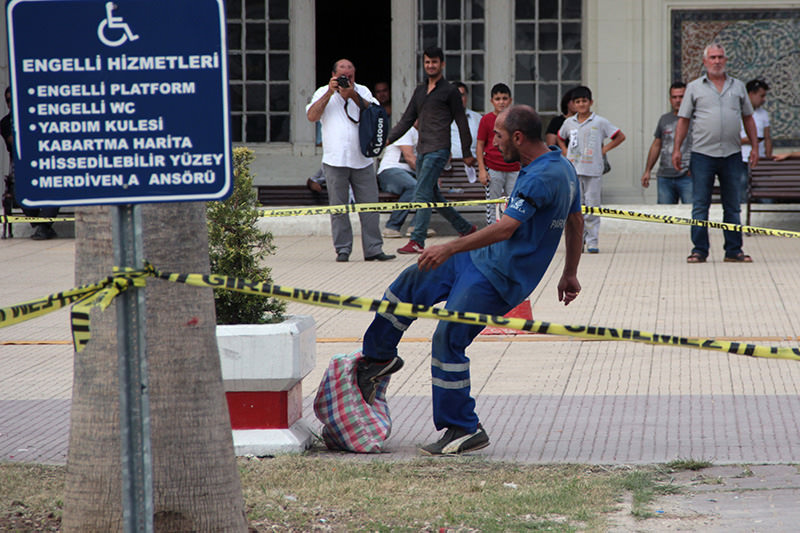 by daily sabah
Oct 12, 2015 12:00 am
A man kicked and then threw a suspicious pack left near the area where a funeral ceremony for the Ankara bombing victims was to be held in Turkey's southern district of Adana on Monday.

Many people gathered in Adana's Uğur Mumcu Square (a journalist who was also killed with a bomb placed on his car in 1993) to commemorate Dilan Sarıkaya and Erhan Avcı, the two victims who died in Turkey's deadliest terror attack that claimed 97 lives on Saturday.

Thirty minutes left to the ceremony, police units detected a package left on the floor near the area through city surveillance cameras and notified nearby units and bomb squads. The police sealed the area, and notified the crowd about the incident. A warning was issued to the crowd to empty the area immediately from an election vehicle belonging to the pro-Kurdish Peoples' Democratic Party (HDP) which was present for the ceremony.

Suddenly, a group claiming that police units disrupted and disrespected the ceremony, broke the security cord, despite nearby citizens' efforts to calm the group. A man kicked and threw the package, although hundreds have lost their lives in terror attacks carried out with bombs in recent months.

Luckily, only meat and butter came out from the package which the man later threw to the police units.
Last Update: Oct 12, 2015 6:17 pm