Turkey to give $5 million to prevent desertification in Africa 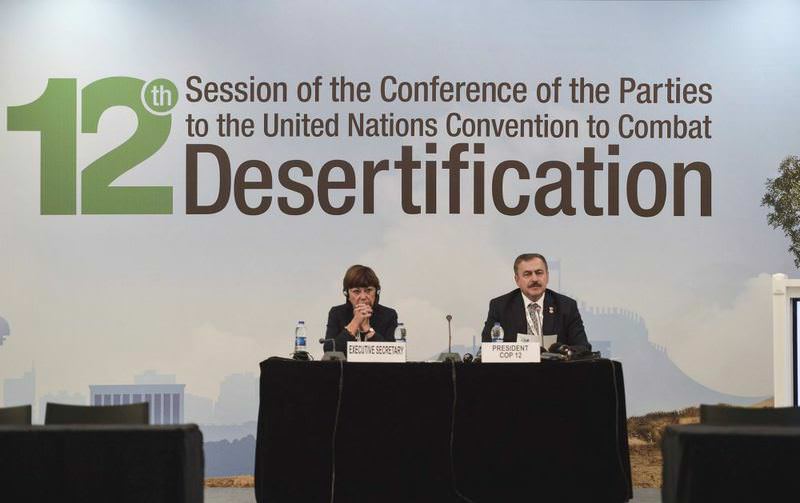 Turkey is hosting an international conference to tackle the threat of desertification. The 11-day event brings together delegates from around the world to discuss the issue. The conference kicked off yesterday with Turkey pledging $5 million in aid toward preventing desertification in Africa

The 12th session of the Conference of the Parties to the United Nations Convention to Combat Desertification, conveniently shortened as COP 12, opened yesterday in the Turkish capital of Ankara. Veysel Eroğlu, minister of Forestry and Water Affairs, was elected as the new president of the COP after the 11-day event opened. Eroğlu said at the opening of the event that Turkey would deliver $5 million in aid to Africa, one of the most affected continents, to fight desertification.

Delegates from 195 countries are attending the event focusing on desertification and erosion. Delegations will discuss ways to tackle land degradation mainly stemming from climate change in arid, semi-arid and sub-humid areas.

Desertification threatens millions of people in several countries and in its ongoing state, can drive more people to displacement, especially at a time of an escalated refugee flow into Europe from conflict-ridden countries, the worst influx since World War II.

Speaking at a press conference at the start of the event with Monique Barbut, executive secretary of the UNCCD, Eroğlu said global warming and desertification are the most important global problems, causing a loss of arable lands and displacement as well as the undernourishment of about 1 billion people across the world. On Turkey is making an effort to tackle the matter, Eroğlu said Turkey, through his ministry and a state-run development agency, helping 1.6 million people in Africa who have limited access to water resources.

The minister also pledged $5 million in aid to African countries as well as providing education to these countries on how to combat desertification, increase plant production and similar subjects. He said Turkey hoped to make a foundation for an international fund for anti-desertification works.

About 500,000 hectares of land turn into deserts every year due to poor irrigation. Officials say Turkey is among the countries affected by the increase in non-arable lands and climate change as it sits in a geographically challenging location sandwiched between different climates and under threat from climate change. More than half of Turkish soil has the characteristics of arid, semi-arid and semi-humid climates. Turkey's central and southeastern regions, known for vast flatlands and steep mountains, are particularly vulnerable to the risk of desertification. Erosion is another threat for Turkey where most lands have an elevation far higher than countries in its immediate region and European countries. Eroğlu said in an earlier statement that Turkey did not have a desert but was at the risk of developing one due to a loss of arable land and a decrease in viability.

The mass planting of trees and improving pastures are among the measures being taken against erosion and desertification as part of an action plan by the government.

The event, which will be attended by ministers and heads of state from around the world, is the first major global meeting since the international community agreed on the Global Goals for Sustainable Development - a set of guidelines for international cooperation on social, economic and environmental action over the next 15 years, according to the COP 12 website.

Delegates will discuss binding decisions expected to be taken at the event for fighting land degradation and recovery of degraded lands, to curb factors threatening water and food security.
RELATED TOPICS