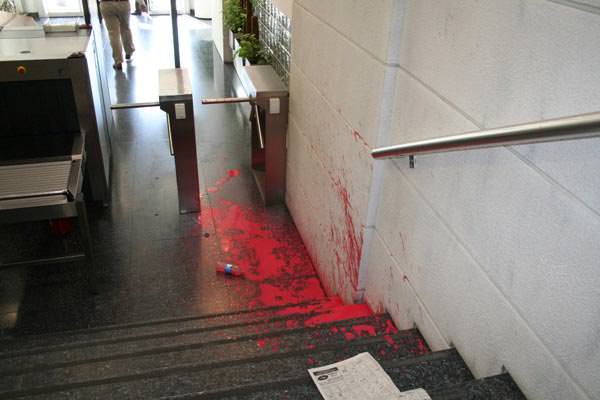 by Daily Sabah Oct 13, 2015 12:00 am
Turkish newspaper Yeni Asır's office in İzmir was attacked by a group on Tuesday after one of the senior officials of the Confederation of Revolutionary Trade Unions of Turkey (DİSK) targeted the newspaper in his speech during a protest.

The group stormed the newspaper's office, throwing and spraying red paint on the walls and windows, and threatened to shed blood while chanting slogans like "you will drown in your own blood" and called the newspaper staff "murderers" after the newspaper called for unity against terrorism in its headlines after the Ankara bombing.

The police have managed to identify eight of the 11 attackers after checking security footage. The attackers were found out to be members of a leftist collective student organization.

The attack took place after the head of DİSK's Aegean region, Memiş Sarı, targeted three newspapers, Sabah, Yeni Asır and Yeni Şafak in a protest also in İzmir province on Monday after those newspapers called for unity against the terrorist bombing attack in Ankara that killed 97 people on Saturday.

Yeni Asır is the oldest serving newspaper of Turkey and it is the largest regional newspaper in terms of circulation
Last Update: Oct 14, 2015 5:56 pm
RELATED TOPICS