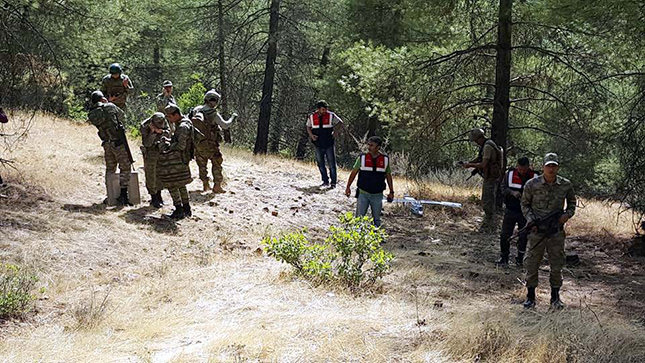 |DHA Photo
by Daily Sabah with Reuters Oct 16, 2015 12:00 am
The Turkish military shot down a drone of unidentified nationality on Friday after entering its airspace without authorization. Warnings were sent to avert the aircraft three times, when the drone did not comply it was shot down by Turkish military fighter jets.

The Russian defence ministry said on Friday all its planes in Syria had safely returned to base and all its drones were operating "as planned" after Turkish warplanes shot down a drone near the Syrian border, the RIA Novosti news agency reported.

An official statement was released on the website of the Turkish General Staff:

"Today, an unmanned drone of unidentified nationality entered our airspace without authorization. Despite three warnings it continued its flight, leading us to deploy fighter jets to shoot down the drone within the laws of engagement."

A high-level delegation from the Russian air force informed the Turkish military about air space violations that took place on October 3-4. The violations had drawn strong reaction from Turkey and its NATO allies.

An investigation is currently underway in order to determine the origin of the unmanned drone.
Last Update: Oct 16, 2015 6:12 pm
RELATED TOPICS