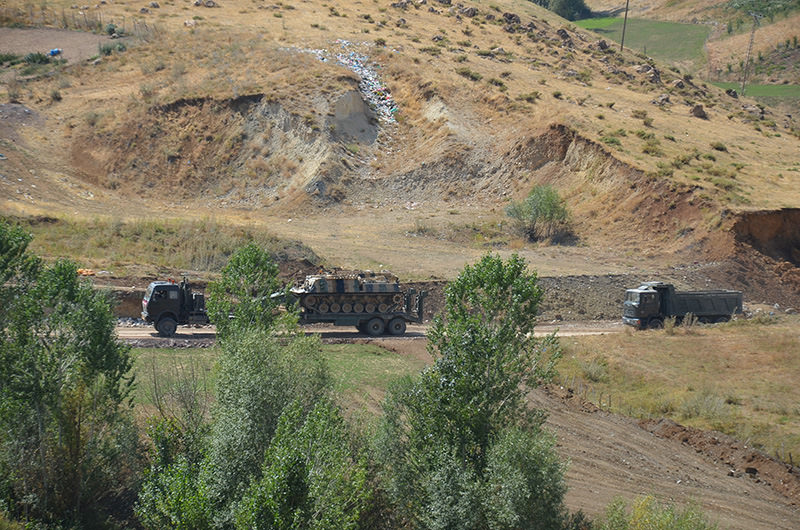 The terrorists opened fire on the armed forces during an operation in Dağlıca village of Yüksekova district of Hakkari province, and three soldiers were killed in the clashes. One of the soldiers wounded in the attack cannot be saved despite efforts, the military announced Sunday.

One of the soldiers was reported to be the brigade commander 43-year-old Colonel İhsan Ejdar who was awarded the Colonel rank a month ago. He left his wife and 12-year-old daughter in capital Ankara to go to Dağlıca on a six-month duty.

Military officials Saturday night informed visited Ejdar's family to inform them of his death, according to the Anadolu Agency reporter at the scene. The colonel will be buried Sunday in Ankara.

One of the other two victims was 34-year-old sergeant Turgay Topsakaloğlu. His family in Eskişehir province was informed of his passing late Saturday.

Topsakaloğlu was married with two children. He was also reportedly the brother of Tuncay Topsakaloğlu, the mayor of Eleşkirt district in eastern Ağri province. His funeral ceremony will be held Sunday in Eskişehir.

The injured soldiers have been transported to nearby hospitals and a wide-range operation has been launched in the area. The security forces also killed 17 PKK terrorists during the clashes.

In another incident, a PKK roadside bomb attack in Tunceli in the southeast on Sunday, two soldiers were killed and two others injured. PKK terrorists detonated a roadside bomb they had placed on the Tunceli-Erzincan highway as an armored military vehicle was passing by.

Four soldiers were injured in the attack, two of whom later succumbed to their wounds at Tunceli State Hospital.

PKK terrorists have also attacked the Selahaddin Eyyubi Airport on Sunday, which hasn't been operating since August due to terror attacks in Turkey's south-eastern Hakkari province.

The terrorists have aimed at the terminal building of the airport with automatic rifles. After airport police officers retaliated the attack, the terrorists escaped from the scene.

Security forces are searching the area for the escaped terrorists.

The Selahaddin Eyyubi Airport, one of the major investments in the area, was built for $102 million in five years, in spite of PKK's struggle to hinder the construction. During the construction of the airport, Terrorists had taken construction workers hostage and set construction machines on fire.

The airport was opened in May 26, with an opening ceremony which was attended by President Recep Tayyip Erdoğan and Prime Minister Ahmet Davutoğlu.

Turkey has been conducting operations against the PKK, an organization listed as terrorist by Turkey, the United States, and the European Union, since late July, when a two-and-a-half year lull in the fighting ended.