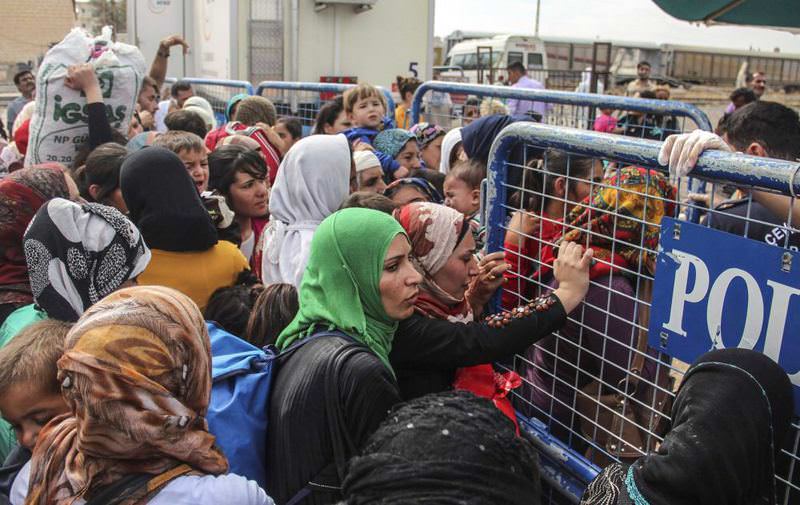 As Syria's border with Turkey remains extremely volatile due to ongoing conflict, Mürşitpınar, a border crossing between Turkey and Syria, is among the few safe aid routes and crossing points for Syrian Kurds

A crossing on the Turkish-Syrian border is the only safe gateway to other countries for Syrian Kurds who live in Kobani, a north Syrian town that was the hotbed of clashes between Kurdish forces and ISIS last year.

The Mürşitpınar border crossing in Suruç, a town in the southeastern Turkish Şanlıurfa province, is the only place to transport humanitarian aid to Kobani, which still remains in ruins after violent clashes. The crossing is occasionally closed due to deteriorating security on the Syrian side, but Ankara, which pursues an open-door policy for displaced Syrians, keeps it open for refugees.

Kobani was the scene of clashes in 2014 that forced more than 200,000 residents to flee north to Turkey, the nearest country where some of their relatives live and where Syrian refugees receive the most help.

Since then, the border crossing is opened every Monday and Thursday for Syrian refugees. Every week, some 5,000 Syrian refugees return to their country while those seeking shelter in Turkey are admitted into the country after being registered with authorities.

Abdullah Çiftçi, the Suruç district governor, told Anadolu Agency (AA) that Mürşitpınar is also the main choice of Syrians and others seeking to travel to Hasakah, another Syrian Kurdish town, as well as Raqqa and Aleppo, cities in northern Syria. Çiftçi said the crossing is one of Syrians' "gateways to the world" and that especially those in Kobani in need of medical treatment seek to cross into Turkey to be admitted to hospitals. Çiftçi said there were plans to add a customs office to the crossing for the transfer of goods. "This is a very busy place. Every week nearly 200 trucks carrying aid cross into Kobani, including those going to other Syrian cities. So far, 16,000 tons of construction materials have been sent to Kobani," he said. Kobani is in the process of rebuilding after devastating clashes last year to push the Islamic State of Iraq and al-Sham (ISIS) away from the town. The town's administration had issued a call to residents who took shelter in other countries, with Turkish media outlets reporting that families will not be encouraged to return during the rebuilding process. Instead, people skilled in construction, technicians, maintenance workers and other individuals with relevant skills are called on to return to help with the process.

Abdurrahman Hamdan, a Syrian Kurd, has been living in Şanlıurfa province's Ceylanpınar, another border district, since 2012. The lack of security on the Syrian side of the border in Ceylanpınar forced him to travel to Mürşitpınar even though he will have to travel another 200 kilometers to reach home. "We were comfortable here in Turkey, but still, we miss our home," he says.

Displaced Kobani residents have been accommodated at Turkey's biggest refugee camp, which was opened in January in Suruç. The camp, built by the Disaster and Emergency Management Presidency (AFAD), has a 35,000-person capacity and currently houses more than 23,000 Syrian refugees. It was built exclusively for those from the predominantly Kurdish town.

Since the conflict broke out in Syria more than four years ago, Turkey has seen a steady flow of refugees from the country whose number currently stands at more than 2 million. A small fraction of them stays in refugee camps in Turkish border towns while the majority of them either live in houses they rent or bought or are homeless. Others, meanwhile, attempt to illegally cross into EU countries on perilous journeys by sea and land from western Turkey. According to media reports, the Syrian regime plans a new ground offensive in Aleppo and experts warn that this could mean a new influx of refugees from Syria to Turkey if regime forces succeed in capturing Aleppo.
RELATED TOPICS