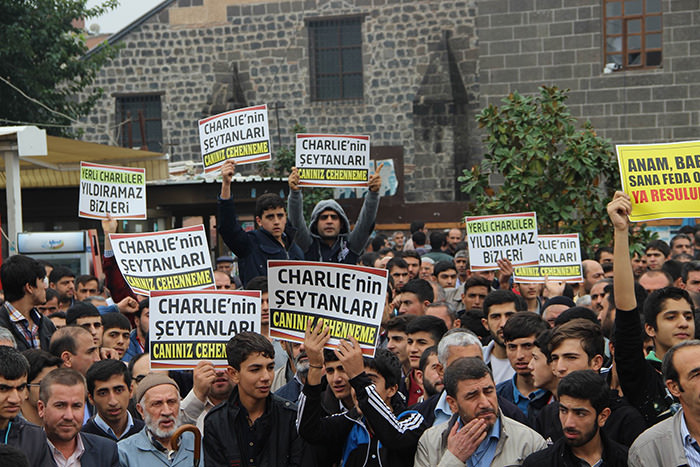 |IHA Photo
by daily sabah Oct 23, 2015 12:00 am
A group of activists staged a rally in the southeastern province of Diyarbakır on Friday against a cartoon depicting the Prophet Muhammad put up on billboards by a municipality in the Yenişehir district of the province.

Protesters from several nongovernmental organizations carried banners with slogans condemning the image and called on municipal officials to resign.

The images were part of a campaign against child brides – girls forced by their families to marry at a very young age. Accompanied by a caption reading: "There are no child brides, only rapist men," the posters show a cartoon, allegedly drawn by a Danish cartoonist, showing a bearded man dragging a naked girl. The original caption with the bearded man saying: "I love you Aysha" was one of the cartoons depicting Muhammad that had raised outrage in the Islamic world for insulting the prophet. The posters hung by the Yenişehir municipality were missing the caption. The images were removed after public outrage.

An activist speaking on behalf of the demonstrators said they could not accept any insults aimed at the prophet and want those responsible for the billboards to be held to account. "We call on the municipal officials to publicly apologize and resign from their duties," the activist said.

The incident sparked outrage on social media, with some people accusing the municipality of provocation. A Twitter user claimed the cartoons served the same purpose as terrorism while another user said even the worst offenders of Islamophobia did not commit such acts. The posters, which were hung last week, were removed soon after photos of them made the rounds online. The municipality released an apology and claimed they simply picked a random photo they found through Google for the campaign. "We never had the intent [of offending people] as some media reports claimed," the statement on the municipality's website said.

The Peoples' Democratic Party (HDP), which accused of having links to the PKK terrorist organization, says it embraces all faiths and ethnicities in Turkey in its political manifesto, though it pursues a mainly pro-Kurdish line. In the past, the HDP has sparked outrage among sections of the Muslim community in Turkey for its leaders pledging to shut down the Presidency of Religious Affairs, the country's top Islamic authority.
Last Update: Oct 23, 2015 5:56 pm
RELATED TOPICS