Russian billionaire Abramovich tips Turkish waiter with TL 2,000 for tying up the boat 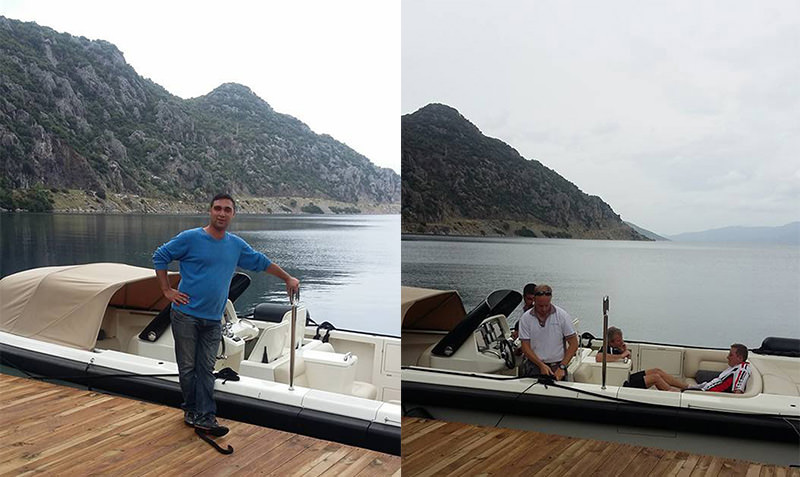 | IHA photo
by daily sabah Oct 23, 2015 12:00 am
Russian businessman Roman Abramovich handed a tip of TL 2,000 ($698) to a waiter after he helped the billionaire to dock at a restaurant during his visit to Turkey's resort town Marmaris in Muğla province.

The incident happened on Thursday during Russian billionaire's holiday with his family in southwestern Marmaris. Abramovich, best known outside Russia as the owner of Chelsea Football Club, came to the Aegean shores with his £1.5billion ($2.31 billion) mega-yacht Eclipse, world's second largest private yacht, which has two helicopter pads, 24 guest cabins, two swimming pools, a disco hall, a movie theater and two mini-submarines.

The Russian billionaire has first anchored his 163-meters long yacht at Hisarönü Bay, across a five-star hotel in Marmaris. A day later, he left his yacht on a small boat along with his ten bodyguards to eat at a restaurant on the shore, and to go embark an expedition tour with his $25,000 bicycle later on.

As the billionaire's boat was approaching a pier close to a restaurant on Selimiye road, one of the waiters helped the crew to tie up the boat. The waiter named Selçuk Günay was later tipped TL 2,000 ($698) by Abramovich's bodyguards for his help.

Günay told the reporters that the Russian businessman had also stopped by their restaurant last year, saying he [Abramovich] was a very "modest" man. He said, "I could not understand that he was Abramovich when the boat approached the pier…As the day of the tip coincided with my payday, it was as if I got two paychecks."
Last Update: Oct 23, 2015 12:27 pm
RELATED TOPICS