Independent candidate holds rally in southeast Turkey, no one shows up 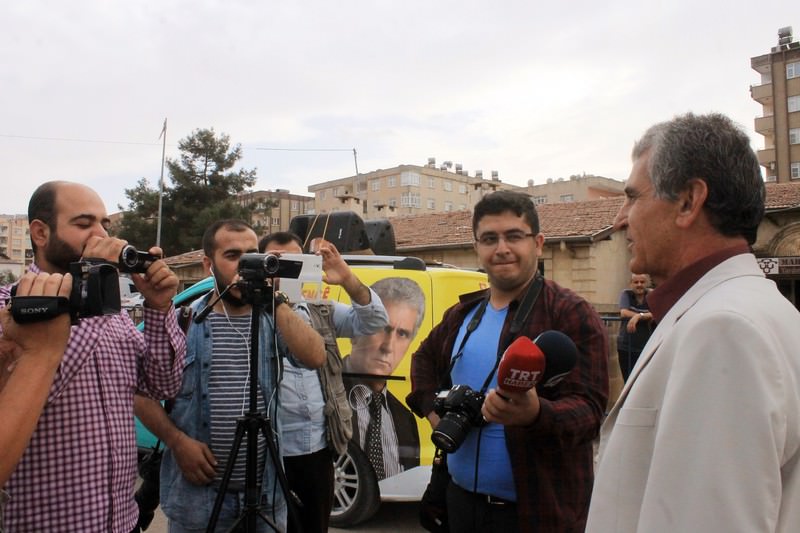 Mehdi Saru0131kaya (R) talks to reporters after his electoral rally in Mardin, southeastern Turkey on October 24, 2015.(IHA Photo)
by daily sabah Oct 24, 2015 12:00 am
As the November 1 Turkish general elections near, one rally in Turkey's southeastern Mardin province was rather a massive flop after almost no one showed up on Saturday. The only people present in the rally of Mehdi Sarıkaya, an independent candidate from Mardin, were a few reporters and cameramen, and police who had come to secure the area.

Sarıkaya drove to the rally area in his own electoral rally vehicle, which he decorated himself. Using an audio system in his car, he made a speech which lasted about half an hour.

Talking to reporters after his speech, Sarıkaya stated that he hadn't invited any relatives or family members to the rally and even though no one came, he said that their hearts were with him.

Sarıkaya also stated that about 25 years ago he had received an offer 'from high places' to be a candidate but he didn't accept the offer.

He said that he eventually gave in when the bloodshed by terrorists in the region showed no signs of stopping, so he decided to run as an independent candidate in this year's elections.

Involved in politics for the past 50 years, Sarıkaya underlined that his aim in the elections is to get more votes than the total of two parties' votes in the city.

He also added that the people who found his decision 'to run for the Parliament only 10 days before the elections' bizarre, "now offer him cakes, coffees and beverages" when he walks through his neighborhood.

Sarıkaya reassured the reporters that he has a swarm of 'hidden' supporters, and that they will see all those votes on November 1.

Sarıkaya also said that he comes from a family with 11 children, and has been a class teacher for 42 years in many cities across Turkey.
Last Update: Oct 24, 2015 11:20 pm
RELATED TOPICS