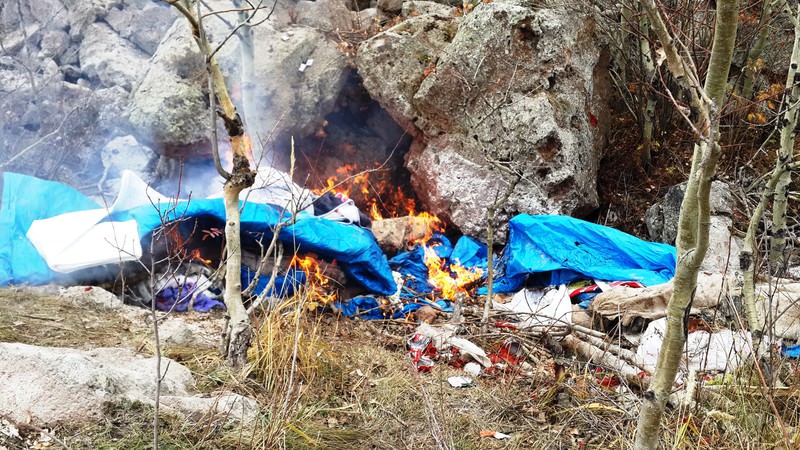 by daily sabah Oct 24, 2015 12:00 am
The Turkish military destroyed 16 hideouts and ammunition depots belonging to the PKK terrorist organization in the eastern Iğdır province on Saturday, including one of its main shelters in the region, seizing a large cache of ammunition.

According to information obtained, a Kalashnikov machine gun, 4,140 Kalashnikov rounds, 500 grams of explosives, 400 Bixi rounds, a grenade, bullets, documents about the group and other items such as tents, blankets and clothing were seized during major operations that were assisted with airstrikes.

The ammunition stash was destroyed at the scene after taking the necessary safety measures, the statement said.

Turkey's crackdown on the PKK began in July after a two-and-a-half year cease-fire collapsed and has escalated ahead of a national election on Nov. 1.

PKK militants have killed more than 120 security personnel and tens of civilians since the terrorist organization recommenced its attacks against Turkey after the June 7 general elections in which the PKK-backed pro-Kurdish Peoples' Democratic Party (HDP) passed the 10-percent electoral threshold.

The PKK - designated a terrorist organization by Turkey, the U.S. and EU - renewed its terrorist campaign against the Turkish state in the aftermath of the July 20 suicide bombing in Suruç district that killed 33 people.
Last Update: Oct 25, 2015 6:01 pm
RELATED TOPICS