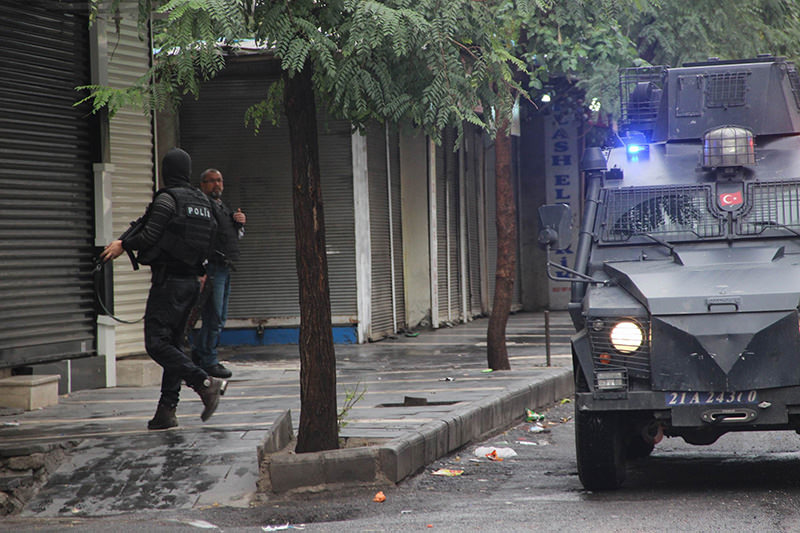 | IHA Photo
by Daily Sabah with AA Oct 26, 2015 12:00 am
Two Turkish police officers who died during a raid on ISIS militants in Turkey's southeastern Diyarbakır province, were killed by a suicide bomber, police said Tuesday.

The officers, identified as Gökhan Çakıcı, 22, and Sadık Özkan, 25, were killed when officers stormed an address Diyarbakır on Monday. Five other officers were wounded in the blast.

Authorities initially said the officers died from booby-trap bombs while breaking down the door. But a statement released Tuesday by the governor's office of the region said: "Two policemen were killed and five security force members were injured during the operation as a result of a suicide bomber blowing himself (or herself) up."

Bomb-making materials and arms were seized during the raid, the statement added.

The police reportedly sent numerous special operation teams as reinforcement to the operation scene after the incident.

Seven suspected ISIS members were killed at the property and another in Diyarbakır as armed police carried out simultaneous raids on 17 addresses, the police's security directorate added.

Another 15 suspects were seized during the operation, including two women and a girl.

On Monday, the provincial governor's office showed off the arsenal of weapons and explosives captured by police during the operation, including two Kalashnikov assault rifles, eight pistols, a hunting rifle, military-grade explosives, ammonium nitrate and hand grenades.

Five of the dead ISIS members were Turkish nationals registered in the eastern province of Bingöl, police said. Officials are still trying to identify the two others through facial recognition technology.

The governor's office said they had entered Turkey from Syria two months ago and had been closely monitored by police and intelligence officers.

The dead militants had all been trained as suicide bombers, police said.

The raids come two weeks after two suicide bombers linked to ISIS killed 102 people at a rally in Ankara.