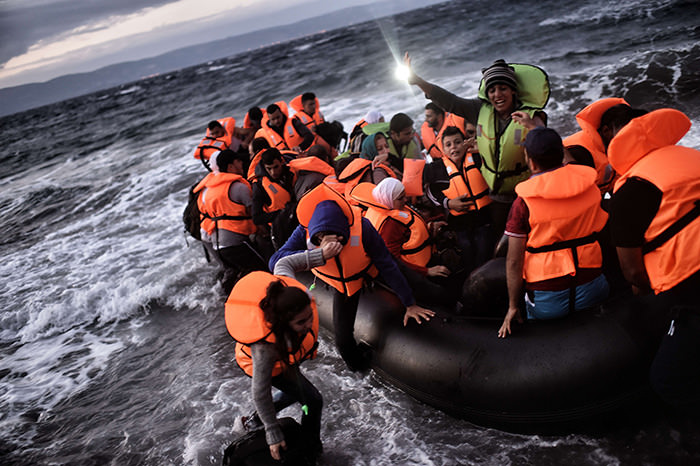 Refugees and migrants arrive at the Greek island of Lesbos after crossing the Aegean sea from Turkey on October 1, 2015 (AFP Photo)
by Compiled from Wire Services Oct 28, 2015 12:00 am
A report by Human Rights Watch (HRW) cited another danger refugees departing from Turkey face on the Aegean Sea: Unknown assailants attempting to sink their boats.

The HRW report says armed, masked men have been disabling boats carrying migrants and asylum seekers in the Aegean Sea and pushing them back toward Turkish waters. Based on accounts from nine witnesses in eight separate incidents, the report says the most recent cases were earlier this month when assailants damaged or removed the engines or fuel from boats carrying migrants and punctured the inflatable boats.

The report comes two months after a Turkish daily released a photo of a man wearing a skeleton mask aboard a Greek Coast Guard boat, who was allegedly one of the assailants attacking refugee boats heading to the island of Chios.

Greece, the nearest gateway to the EU for illegal immigrants who flock to Turkey in pursuit of a better life in EU countries, is coping with a record number of migrants arriving daily on its islands just off the Turkish coast. Tens of thousands of migrants have arrived on the islands since January in a refugee crisis not seen since World War II. And more are likely to come, as the islands see hundreds arriving daily all across the Aegean Sea.

Not every migrant is able to arrive on an island. Often traveling in unsafe, overcrowded boats, migrants risk death, as boats tend to capsize in bad weather. The Turkish Coast Guard, which stepped up operations this year, intercepts many and rescues those struggling to survive after their boats capsize.

Every day, hundreds wait in seaside towns on the Aegean coast, a more than 2,600-kilometer-long coast stretching from Çanakkale in the north to Muğla in southwestern Turkey. At night, and sometimes in broad daylight, they hop on rafts arranged by smugglers to travel to the Greek islands. The small inflatable boats are capable of carrying four people, but desperate migrants travel by the dozens, risking capsizing the boats.

Quoting an Afghan migrant, the report says a speedboat rammed their raft and there were five armed men aboard dressed in black, their faces covered with balaclavas. "At first when they approached, we thought they had come to help us," the migrant told HRW. "But by the way they acted, we realized they hadn't come to help. They were so aggressive. They didn't come on board our boat, but they took our boat's engine and then sped away." He said Afghans can understand a bit of Turkish and the men attacking them were not speaking Turkish.
Last Update: Oct 28, 2015 5:13 pm
RELATED TOPICS