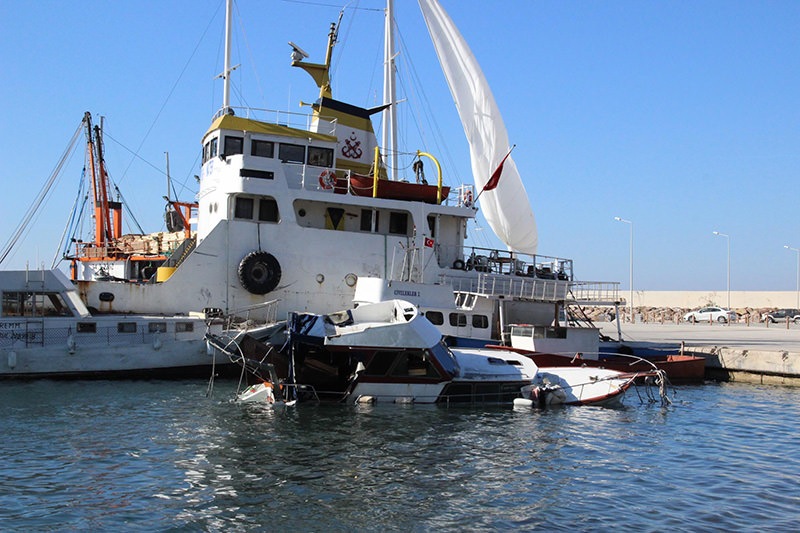 Fourteen migrants heading to Greece from Turkey on a boat drowned when their boat sank late Tuesday in the latest tragedy to hit refugees increasingly seeking to reach the EU, which still debates how to tackle the crisis

Fourteen migrants including seven children drowned in the late hours of Tuesday when their boat sank off the coast of Ayvacık, a Turkish town located near the Greek island of Lesbos. Twenty-seven others survived the incident and were rescued by the Coast Guard.

The tragedy adds to a long list of casualties in the refugee crisis aggravated by escalated conflict in Syria. The nationalities of the victims in yesterday's incident were not immediately known, but Ayvacık, on the northwestern part of the Aegean coast, is a popular departure point for migrants from Syria, Afghanistan and other countries plagued by conflicts and poverty.

Hamza Erkal, governor of Çanakkale province where Ayvacık is located, told Anadolu Agency that the migrants decided to go ahead, although their boat was damaged from hitting rocks near the coast, according to the media reports, and started taking on water en route to Lesbos. "They tried to return to the coast when the water level in the boat rose, but it sank before they reached the shore," he said. Erkal said search and rescue efforts were underway to find other potential survivors or bodies. He said that there were "probably 41 people" aboard the wooden boat and most victims were women and children.

Turkish media reported that all bodies except one were found inside the sunken boat. Survivors, including a pregnant woman, were hospitalized with minor injuries.

According to statistics by the Coast Guard, more than 76,000 migrants were intercepted between January and November 2015, a far higher figure than the 14,961 people captured last year. Though this figure also includes those crossing land borders, the majority of migrants prefer sea crossings as Turkey's lengthy Aegean coast is the closest entry point, at a few kilometers away from Greek islands, the nearest gateway to the EU. More migrants are expected in the coming months as the United Nations refugee agency (UNHCR) said last week. Up to 600,000 migrants are expected to attempt the potentially lethal trip to Greece over the next four months, according to the UNHCR.

The latest fatalities off of Ayvacık show that migrants are apparently undeterred by the risks the sea journey entails. Coast Guard figures show 170 people died in attempts to cross to EU countries.

The plight of migrants trying to reach the EU from Turkey had drawn an emotional, global response after the image of Aylan Kurdi, a 3-year-old Syrian boy whose body washed ashore on the Turkish coast in September hit the headlines, triggering outrage and forcing the EU to reconsider steps to tackle the crisis with several countries announcing they would allow in more migrants. European Council President Donald Tusk said ahead of a summit on migration that the EU was under pressure from the events, with governments reviewing over 1 million asylum applications between them, "a record number that would test any developed democracy."

Turkey has taken in more than 2 million Syrians refugees from its southern neighbor and is a springboard for migrants heading to the EU. The country id struggling to cope with the influx and has repeated calls to the international community to do more for refugees. Ankara's proposal for the establishment of a safe zone in Syria to keep displaced Syrians in their own country and stem the flow to Turkey and the EU is not supported by other countries, which prefer debating the number of refugees they would allow in instead. The EU's Turkey Progress Report for EU membership was released on Tuesday and praised Turkey's humanitarian support for the refugees and called on the EU to step up its cooperation with Turkey on the crisis.
Last Update: Nov 12, 2015 10:16 am