Neo-Nazi trial: Lawyers try to resign, defendant may speak out 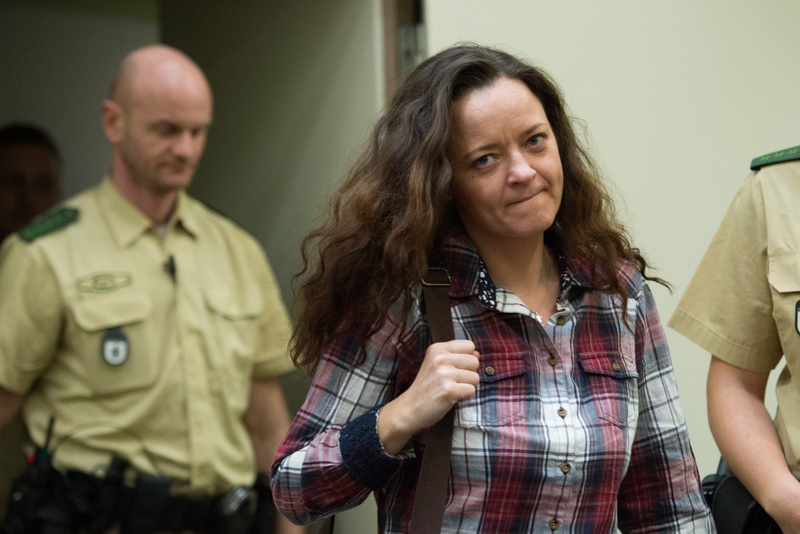 Beate Zschaepe, the only surviving member of the NSU, at a courtroom in Munich yesterday. Zschaepe never broke her silence during the hearings except for a curt ,yes, or ,no, to the judge's questions.
by Daily Sabah with Wires
Nov 11, 2015 12:00 am

The trial of a neo-Nazi gang implicated in the murder of Turks in Germany took a new turn yesterday as lawyers for Beate Zschaepe, the sole surviving member of the gang, submitted their resignation before today's hearing where Zschaepe is expected to speak out for the first time in more than two years

The trial of the National Socialist Underground (NSU), a neo-Nazi gang accused of murdering eight Turks and carrying out bomb attacks in a racially motivated crime spree, may take a new turn after a lengthy process with little progress.

A lawyer for Beate Zschaepe, the only surviving member of the three-person gang, said she may speak out after two years of silence, according to German media after a firm silence throughout hearings. However, her decision apparently angered three court-appointed lawyers after a fourth lawyer said he would present a statement by Zschaepe in today's hearing. Wolfgang Heer, Wolfgang Stahl and Anja Sturm applied to the court in Munich to relieve them of their duties on the grounds that "a defense in terms of the interests of our client is no longer possible," German news agency dpa reported. Lawyers said their appointment as a defense team was just "a facade and transparently served merely the maintenance of the appearance of a proper defense," noting that they heard from the media reports on Monday that the defendant would issue a statement.

A fourth lawyer was recently appointed to the defense team earlier this year after Zschaepe argued with other lawyers and her defense team had asked for their dismissal.

One of the most shocking crime sprees in the recent history of Germany came to light when the bodies of two men sharing the same name and a dire purpose were found in a mobile home in Eisenach, Germany, on Nov. 4, 2011. Uwe Mundlos and Uwe Böhnhardt had apparently committed suicide after police closed in on the duo following a robbery. What followed was the startling revelation that the two men, along with their female accomplice Beate Zschaepe, who is currently standing trial, were behind a series of murders targeting Turks and Greeks as well as bombings in migrant-populated neighborhoods. The trio called themselves the National Socialist Underground (NSU).

After the discovery of the NSU, it was revealed in the trial that the gang had connections to informants recruited by the German intelligence agency, which raised the question of whether intelligence officials had knowledge of the gang's activities and deliberately ignored it.

The lawyers for the Turkish victims of the attacks had complained earlier that the German state failed to shed light on the gang's "connections" to German intelligence services.

The discovery of the gang, which was also implicated in a string of bank robberies, had fueled a debate on the failures of intelligence agencies in detecting the activities of the gang for years, though it was known that the intelligence had a fair share of high-profile informants in the neo-Nazi scene.

Meanwhile, the German parliament will ratify today the establishment of a new parliamentary committee for probing the NSU's activities. An inquiry by a previous committee and investigations by several state-level committees had showed negligence or deliberate ignorance on the part of German intelligence and security agencies on the case. The committee is expected to focus on a wider network of neo-Nazi movements that the NSU is thought to be linked with. It will also investigate claims that police ignored evidence in the trailer home where two NSU members were found dead.