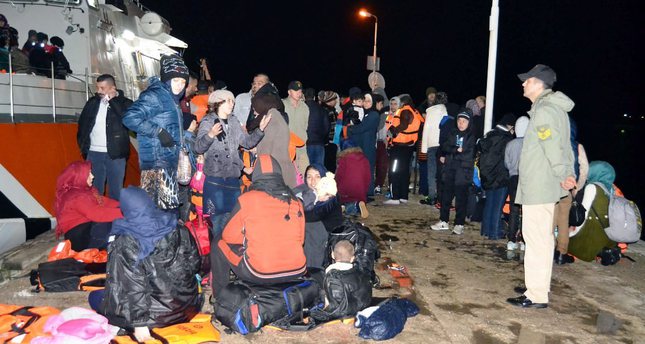 Some 222 refugees have been rescued by the Turkish Coast Guard off the Ayvalik coast of Turkey's western Balikesir province Sunday.

The Turkish Coast Guard said the refugees had been en route to the Lesbos island of Greece in the Aegean Sea -- one of the preferred destinations by refugees who want to reach Europe - in four different boats.

One of the four boats had just reached the Turkish Maden Island near Balikesir when it capsized due to overloading.

The Turkish Coast Guard pulled the refugees from the water along with other refugees in the remaining three boats.

The refugees, of which 65 are children and 41 are women, are of Syrian, Palestinian, Tibetan and Indian nationalities.

They were brought to Cunda Island near Balikesir.

One of the rescued children was sent to Ayvalik State Hospital due to illness.

According to the International Organization for Migration, more than 220,000 migrants arrived in Greece by sea in October and more than 220 died in the waters between Turkey and Greece that month.

Since the start of the year, the organization has recorded 653,075 migrants arriving in Greece and 512 migrant deaths in the Aegean region.

Share on Facebook Share on Twitter
Previous in Turkey Arab writers and activists have launched an e-campaign aimed at supporting... Next in Turkey A 17 year-old teen worked for months as a nursing intern in a hospital...
DAILY SABAH RECOMMENDS