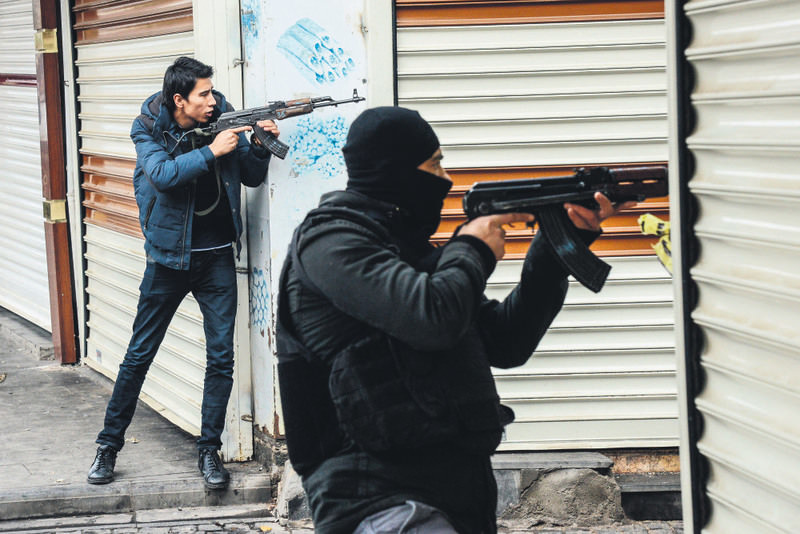 A plainclothes police officer and a special forces officer point their guns toward the street where Tahir Elu00e7i was killed. Officers were deployed in the area after a forensics team examining the scene came under fire yesterday.
by Daily Sabah Dec 01, 2015 12:00 am

The PKK violence that led to the death of a notable lawyer in the southeastern city of Diyarbakır refuses to die down despite a curfew, with terrorists attacking a prosecutor investigating the crime scene yesterday in the city's Sur district where clashes left most of the district damaged

The southeastern city of Diyarbakır continues to suffer ongoing PKK violence. On Monday, terrorists attacked a prosecutor trying to investigate the crime scene where the notable lawyer Tahir Elçi was killed on Saturday. No one was injured in the second attack, which comes just two days after a delegation from the prosecutor's office attempted to examine the crime scene, which culminated in the declaration of a weekend curfew, lifted only Monday morning.

Tahir Elçi was holding an outdoor press conference calling for an end to violence when a single bullet struck him in the head, moments after a confrontation between terrorists and police near the site of the press conference.

The circumstances are unclear on how he was killed and an investigation was launched to determine whether he was caught in the crossfire during the clash between PKK members and police or deliberately targeted by a long-distance shot, as some media outlets have claimed.

The first investigation at the crime scene by prosecutor Ramazan Solmaz was thwarted when terrorists opened fire on him and officials accompanying the prosecutor on Saturday, injuring two police officers. Local authorities declared a curfew on Saturday in Sur, where the attacks took place. The curfew was lifted yesterday morning and Solmaz and his team were at the scene shortly before it was lifted, only to be targeted by militants who opened fire and hurled bombs on the group. Officials escaped from the attack and were not injured.

The lifting of the curfew also revealed the extent of the damage left behind after clashes between the PKK and security forces in the district. Prior to the killing of Elçi, two police officers who had stopped a suspicious car a few hundred meters away from the scene were killed when terrorists inside the car opened fire. A manhunt has been launched after terrorists fled on foot following the attack. It is not known whether Elçi was killed during the clash between police and fleeing terrorists as the inquiry into the scene has been delayed and key evidence is reportedly missing, according to the Turkish media. Violent clashes had ensued since the incident, with militants holed up in the neighborhood firing rockets at security forces.

Meanwhile, the PKK, which renewed its campaign of terror in July after a lull in the conflict, the result of a government-sponsored reconciliation process, continued its attacks elsewhere in the southeast. In Derik, a district of Mardin, a specialist sergeant was killed and another soldier was injured yesterday during an anti-terror operation. A curfew was imposed in the district four days ago after the militants blocked the streets and carried out attacks against police and soldiers. The slain soldier was part of a military unit cracking down on militants hiding out in the district.
Last Update: Dec 01, 2015 2:14 am
RELATED TOPICS