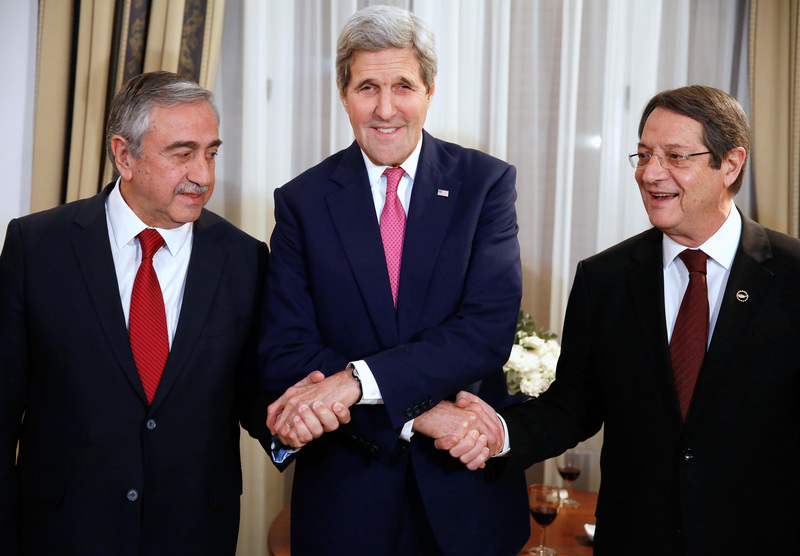 by Anadolu Agency Dec 04, 2015 12:00 am
U.S. Secretary of State John Kerry said Thursday that an end to the division of Cyprus was "within reach", after he visited both sides of the island to encourage peace talks.

"I am more convinced than ever that a resolution to the longstanding division of Cyprus is within reach, and with it, the many benefits of unity for all the people of the island," he said after meeting both Turkish Cypriot President Mustafa Akıncı and the Greek Cypriot leader, Nicos Anastasiades.

His visit came after UN peace envoy Espen Barth Eide last week announced "further progress" in talks. Hopes for a peace deal have risen after leaders of both sides resumed negotiations in May.

In a separate press conference, Akıncı, expressed his pleasure at Kerry's meeting:

"The U.S. reaffirmed its will and determination [to find] a solution in Cyprus and its desire to help us [during the negotiation process]," he said.

The island was divided after a 1974 military coup in Greece led to Turkey's intervention. Northern Cyprus declared its independence in 1983.

In September this year, Akıncı also said he wanted to see Cyprus adopt a federal structure of two zones.

During his speech, Akıncı also refuted reports that the U.S. lifted an embargo on exporting weapons to the Greek Cypriot administration.

"We've discussed the topic [with Kerry] this evening as well. Such a decision is out of the question," he said, adding: "It is clear that it will not be helpful to the [negotiation] process. So, we believe that such a development will not happen."

The embargo, imposed in 1974, bans the export of weapons to southern Cyprus.