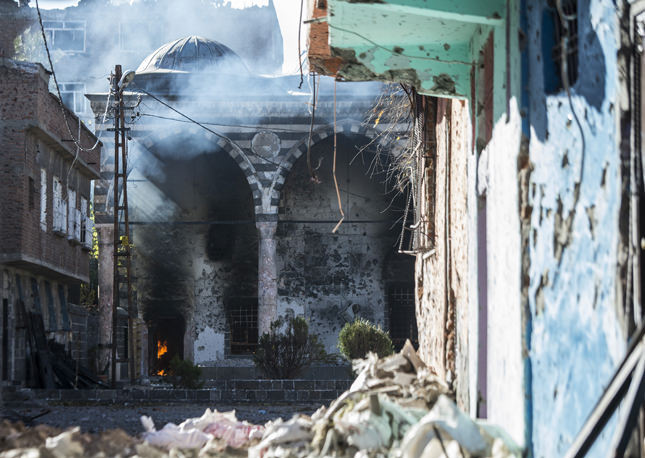 by Daily Sabah Dec 07, 2015 12:00 am
The PKK terrorist organization torched a centuries-old mosque in southeastern Turkey on Monday in the latest instance of deadly violence in the region, which is now targeting cultural heritage sites.

Fatihpaşa mosque in the city of Diyarbakır was attacked by members of the PKK terrorist organization, which also blocked firefighters access to the blaze. The fire gutted most parts of the mosque.

The 16th century mosque in the Sur district was the target of an attack in the early hours on Monday by terrorists armed with homemade explosives. As flames engulfed the building, police and firefighters rushed to the scene, but terrorists in the area opened fire on crews, stopping them from extinguishing the fire in an area where a curfew was in place to stop terrorists.

The mosque, also known as Kurşunlu (leaded) because of its lead-covered dome, joined the long list of historic sites that fell victim to the PKK violence that resumed in July after a few years' lull. Built in the early 16th century, the mosque is the first Ottoman landmark in the city and was among the non-residential places damaged in the renewed PKK violence. The militants had opened fire on the mosque recently, damaging its walls, door and windows.

It is also located in an area where the terrorists dug ditches on the streets for street clashes and set up explosive-laden booby traps. The area also houses several other historic mosques as well as Armenian Catholic and Protestant churches.

Two days ago, Mustafa Katırlı, a special operations police officer deployed in the district for a clampdown on terrorists, was killed when terrorists hidden in the mosque opened fire.

The Sur district has been the scene of heavy clashes between terrorists and security forces. Anti-PKK operations were heightened in the district, after the killing of two police officers and Tahir Elçi, head of the Diyarbakır Bar Association in November. Elçi was shot dead during a clash between police and terrorists, though it is still not known whether he was caught in the crossfire or deliberately targeted. Tahir Elçi was holding a press conference outside a historical minaret in the district that is riddled with bullet holes moments before he was shot. The prominent lawyer was calling for calm in the region after intensified violence since July, which has claimed more than 200 lives.
Last Update: Dec 07, 2015 4:52 pm
RELATED TOPICS