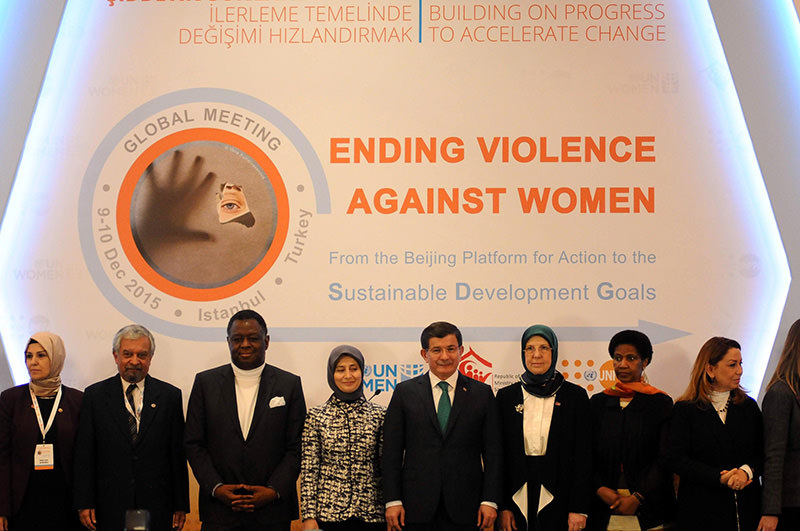 Speaking at a United Nations meeting in Istanbul on Wednesday on ending violence against women, Prime Minister Ahmet Davutoğlu called for a comprehensive fight to end the global problem of violence and said ending violence needs a change of mindset instead of harsher laws

At a United Nations summit in Istanbul on Wednesday, Prime Minister Ahmet Davutoğlu emphasized the need to change people's mindset and restore moral values to end violence toward women, explaining that stricter laws would not be as effective as changing people's views.

The U.N. summit, "Ending Violence Against Women: Building on Progress to Accelerate Change," is assessing global progress in the struggle against violence targeting women and calls for more political commitments to end the epidemic.

Davutoğlu said the tone of discourse on the issue reveals the extent of the erosion of social and moral values. "Violence against women is nothing new but, thanks to new communication technologies, we are more aware and have a better view of how violence in all its forms have evolved into a mindset," Davutoğlu said. "Stories of violence both contribute to the prevalence of violence and raise awareness to prevent violence," he added.

The prime minister said social unrest takes a heavy toll on women. "They are victims of war; they are left caring for the children who are victimized by wars. Women are the first to pay the price for turmoil and they are under a heavy burden," he said, giving examples of the women who live and die in conflict zones.

"I will never forget how I cried alongside the father of a 17-year-old girl in Gaza who was killed in a bombing in the city. I thought about my own daughters at that moment. Bombs took away that girl's dreams. I will never forget a young girl I met at a refugee camp for Syrians in Turkey who smiled when she met me, just before both her legs were amputated due to injuries from a bombing," he said, noting that the biggest example of violence against women can be seen in Syria. "Syria is still under bombardment. It is still ruled by a regime that is killing its own people and the DAESH terrorist organization is still active," Davutoğlu added.

He emphasized that Turkey would be first to respond "to a woman's cry anywhere in the world." He said: "The most important mission that will put a meaning to our existence, to politics, is to end the suffering of people all around the world."

He gave a number of examples of women facing violence, noting that "world is full of instances of violence [against] and suffering of women." "We have seen a pregnant Frenchwoman in the Paris attacks pleading for help while she was clinging to a window. We remember women dying at sea, we remember the baby Aylan [Kurdi] and his mother," he said, referring to Syrian refugees who drowned in the Aegean Sea. "Girls are exploited and brainwashed to be suicide bombers or killed violently," he said. "[W]omen are symbols of mercy, compassion and conscience," he said.

Davutoğlu also mentioned Özgecan Aslan, a 20-year-old woman who was brutally killed in southern Turkey when she resisted a rape. "We took measures and will take more so that no woman will suffer even from a slap," he said.

He said modernity, globalization and innovations, paradoxically both feed violence and used to curb it, adding: "We should discuss how we can use the tools this age gives us in conformity with an understanding of ethics and moral values," he said.

"In our culture, human beings are dignified. Loving and respecting other people is its basis and stops violence at its roots. Turkey or other countries can implement deterrent measures to end violence, but laws are not the only solution to violence. It is more about mindset, the values we build our world upon and protecting other people's rights," he said.

The meeting was coordinated by Turkey's Ministry of Family and Social Policies, the United Nations Population Fund (UNFPA) and the United Nations Entity for Gender Equality and the Empowerment of Women (UN Women). UN Women says one in three women worldwide suffer from violence, "often by someone they trust," and nearly half of the murders are committed by a spouse, partner or family member.

At the summit, experts are examining data on violence and discussing the best ways to prevent and ultimately eradicate gender-based violence. The meeting will also review the progress that has been made since the Beijing Declaration which was adopted by 189 countries in 1995. In the declaration, countries voiced their commitment to the implementation of measures to eliminate violence against women and girls and promote gender equality.