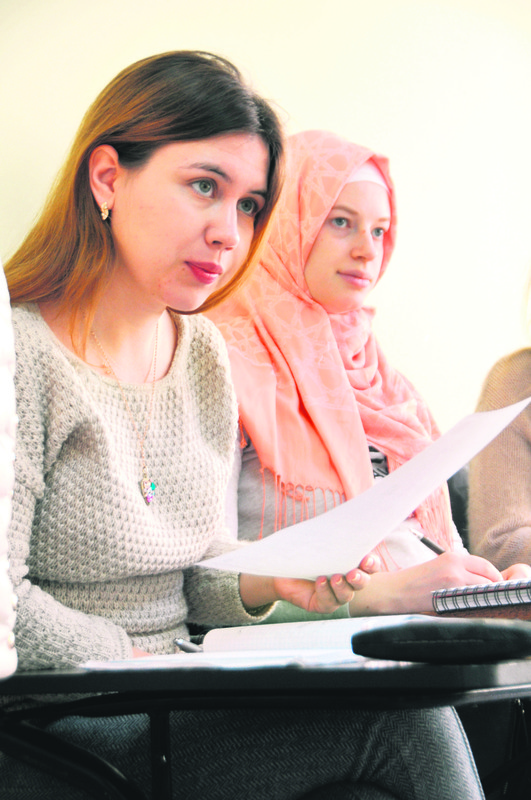 by Anadolu Agency Dec 11, 2015 12:00 am
Forty foreign women married to Turks in the province of Kocaeli are taking professional Turkish culture courses at the Mimar Sinan KO-MEK. They take Turkish language classes accompanied by training on traditional cuisine and handicrafts as well.

One of the trainees, Kira Kayalar, a Russian, has lived in Turkey for two-and-a-half years. "I moved to Kocaeli after I got married. I have been attending the courses since October. I was learning Turkish on my own previously," she said. Another trainee comes from Uzbekistan. Yuliya Lobıkina settled in Turkey a year ago and met her husband via the Internet. Nina Mirzayane from Turkmenistan said she has lived in Kocaeli for the last three years. "I met my husband in Kocaeli. Now I am learning Turkish here and planning to attend more courses. I am willing to teach my daughters about Turkish culture," she said. Another Russian trainee, Oksana Işık, also tried to learn Turkish at home but began attending the courses at the center as soon as she heard about them. Claire Hunter, a British woman taking the course, said she was living in Turkey for four years. "I met my husband through a friend of mine. I do not know much about Turkish cuisine, this why I am here," she said. Ukrainian Kaberyna Basanskal Kaygısız also praised the atmosphere at the course, saying that she had forged new friendships. Residing in Kocaeli for the last 11 months, Kaygısız said: "I can now speak Turkish better. I adopted Islam before I came here."

Memnune Gürcan, the head of Mimar Sinan KO-MEK, said they began offering various courses at the center after receiving requests from foreign women settling in the city who married Turkish men. Gürcan said they first want to learn Turkish. "After they learn Turkish, they want to take courses on traditional arts and food." Gürcan said. Bahar Yılmaz, a Turkish language trainer, said she has taught Turkish for four years at the center. Yılmaz added that the courses are not only about Turkish language as the students socialize with each other as well.
RELATED TOPICS