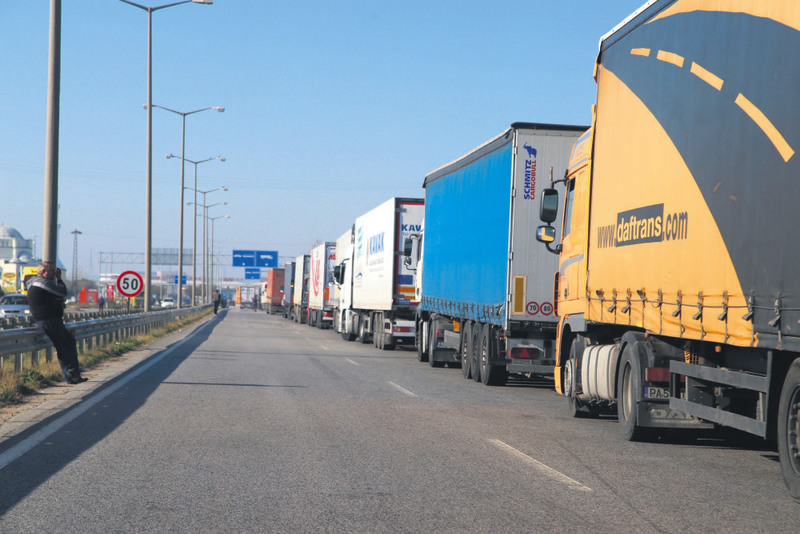 by Daily Sabah with AFP Dec 14, 2015 12:00 am
Bulgaria's ever-troubled Kapitan Andreevo border crossing with Turkey was shut down again Sunday, frustrating Turkish motorists heading to the country. Later on the same day, Bulgaria reopened its border with Turkey after closing it for five hours during an anti-corruption raid that led to 33 customs officials being detained, prosecutors said.

The customs officers were detained "in the dismantling of a group engaged in organized crime", said Daniela Popova of the prosecutor's office, who headed the corruption probe.

Earlier, chief prosecutor Sotir Tsatsarov told public BNR radio that those detained were "all customs officers from the morning shift, who control the entries into Bulgaria at the Kapitan Andreevo" border checkpoint.

The crossing has been frequently closed down in the past due to glitches in the customs computer system or investigations into rampant corruption among Bulgarian officials.

This time was another anti-corruption investigation that led to the detention of 33 customs officers, leaving the crossing understaffed. A long line of vehicles quickly formed on the Turkish side of the busy crossing while Bulgarian security forces rounded up officers and launched raids in several Bulgarian towns near the border in connection with a cigarette smuggling operation. Bulgaria is a popular route for cigarette smugglers both smuggling goods from there to Turkey and other places and into Bulgaria for sales in Europe. In March, 26 people, including customs officials, were arrested at the border crossing, leading to another brief closure.

A line longer than 10 kilometers was visible on the Turkish side of the border. Turkish officials diverted traffic to the Hamzabeyli border crossing, a longer route for frustrated drivers complaining of waiting for hours.

Kapitan Andreevo is the largest and busiest border checkpoint in the Balkans and a major crossing point on the route between Europe and the Middle East.

Bulgaria's geographical position at the European Union's exterior border makes it a major crossroads on the route of smugglers and human traffickers.