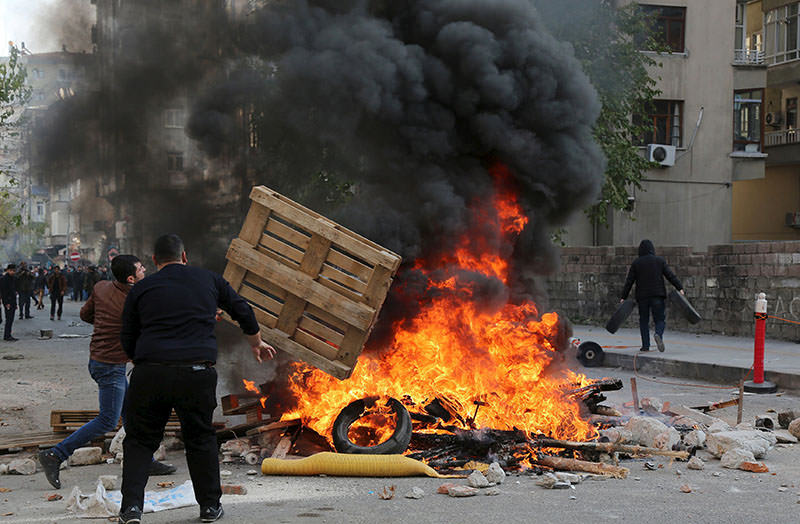 Demonstrators set tyres on fire as they clash with riot police during a protest against the curfew in Sur district, in the southeastern city of Diyarbaku0131r, Turkey, December 14, 2015 (Reuters photo)
by Daily Sabah with Agencies Dec 14, 2015 12:00 am
Two people aged 21 and 25 have been reported to have lost their lives in the southeastern district of Diyarbakır on Monday, following protests denouncing the curfew imposed in the district of Sur.

About 5,000 gathered in the province in attempt to march to Sur district to denounce a curfew which has been intact since 12 days ago to clear ditches and barricades set up by the PKK terrorist organization.

Shopkeepers shuttered their stores ahead of the protest. Few buses were operating, rubbish was not collected and most students did not go to school.

According to images and videos released on social media and by various news agencies, protesters threw stones and set barricades on fire, upon which the riot police used tear gas and water cannons.

Two protesters were both shot dead in clashes. The circumstances of the deaths were not immediately clear, but a police source in Diyarbakir reportedly said that the two men had attacked the police, and said officers used legal force when shooting the pair. At least two other people were wounded and some 40 arrested.

In Şırnak province, the governor imposed a curfew in two towns near the borders of both Syria and Iraq from Monday night, a day after teachers were seen streaming out of the area on the orders of education authorities.

Locals, anticipating that the teachers were being recalled ahead of a curfew, formed queues at bakeries and shops to buy food, witnesses said. Several thousand teachers are based in the towns.

The two towns of Cizre and Silopi were under tight security, with police armored vehicles stationed at the entrances to both, witnesses said.

"A curfew is declared to neutralize separatist terror group members, remove explosives-laden barricades and ditches ... and secure public order," the Şırnak governor's office said in a statement. It said the curfew would begin at 11 p.m. (2100 GMT).

A ceasefire between the state and the PKK terrorist organization collapsed in July after holding for more than two years.

At least 600 people have since been killed inside Turkey. The air force also launches airstrikes against PKK bases in Iraq.