Land home to 1.3 million in Turkey may be submerged, report says 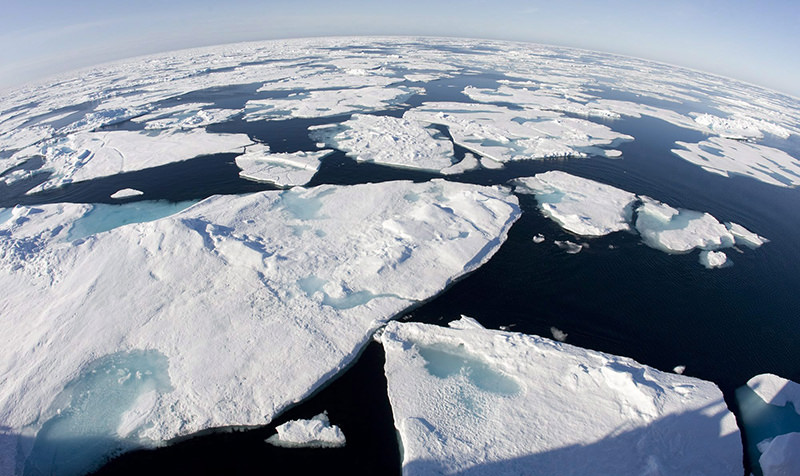 This July 10, 2008 file photo made with a fisheye lens shows ice floes in Baffin Bay above the Arctic Circle, seen from the Canadian Coast Guard icebreaker Louis S. St-Laurent (AP Photo)
by Daily Sabah Dec 16, 2015 12:00 am
Land that is home to more than 1.3 million people in Turkey may be submerged if countries fail to abide by their pledges made during the 2015 United Nations Climate Change Conference that was held in Paris, according to a report released by Climate Central.

The report titled "Mapping Choices: Carbon, Climate and Rising Seas Our Global Legacy" outlines that a 2 degrees Celsius increase in temperature may mean land that is home to 1.3 million people in Turkey will be submerged.

Throughout the world, 470 to 760 million people may be affected if carbon emissions continue as usual and cause a warming in increase by 4 degrees Celsius.

"Carbon cuts resulting in the proposed international target of 2 degrees Celsius warming would reduce the rise locked in so that it would threaten areas now occupied by as few as 130 million people," the report said.

Meanwhile, the report underlined that China could "lose the most from business" and "gain the most from limiting carbon emissions" as it would mean saving 81 million people by limiting warming to 2 degrees Celsius.

Delegates of 196 parties held negotiations in Paris earlier this month in a bid to strike a deal on carbon emissions. An estimated 150 heads of states, including President Recep Tayyip Erdoğan and U.S. President Barack Obama, attended the opening day of the climate change conference on Nov. 30.